Mystery of the Ancients 3: Three Guardians

Mystery of the Ancients 3: Three Guardians

Mystery of the Ancients: Three Guardians
by Mariaglorum - January, 2014 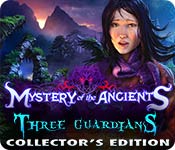 Uncover the secrets of Green Hill in Mystery of the Ancients: Three Guardians! After receiving a frantic call from your niece, you arrive in Green Hill to discover that things have really gone to the birds. A flock of mysterious crows has been terrorizing the town, attacking citizens and causing them to vanish in their tracks. But they’re just the hired help. A strange man in a feathered cloak has a vendetta against your niece’s boyfriend, and he’ll stop at nothing to clear his path to revenge. Can you uncover the secrets behind his feathered fury and rescue Green Hill before it’s too late? Find out in this gorgeous Hidden Object Puzzle Adventure game!

FIRST IMPRESSIONS
Mystery Of The Ancients has been a pleasant series, with a couple of good 4 star games. Three Guardians is a sure-fire 5 star hit. From the exciting and beautiful opening sequences (both the one before and after the main menu), we are in for something absolutely excellent.

SIGHTS & SOUNDS
The graphics are wonderful. The cut scenes some of the best I’ve seen, and the one after the main menu gets my vote for the best of its kind ever. Throughout, the visuals are beautifully crafted and distinctive, clear and bright in the HOPs. This is a fairly dark themed game, but the colours are there to produce a splendid show. There is plenty of movement and the animation is done very well.

The voices are just fabulous. No attempt has been made at lip synch, but the acting is good, the voice very much a part of the character it represents. The background sounds are fairly unobtrusive, and the music is much the same.

WHAT’S HAPPENING?
Your niece calls you for help. She is trapped in a town besieged by ravens, and a sinister man in a raven feather coat. Her boyfriend disappeared after the ravens attacked him, and others have gone missing as well. On your (extremely dramatic) arrival, you find a virtual ghost town, the only people in sight disappearing before your eyes beneath the ravens. There is dark magic around, and you don’t know how you are going to counter it, but so far, being handy with a gun has helped! A broken amulet finds its way into your possession, and you find something you can use to defend yourself – if only you can find all the missing crystals.

GAMEPLAY
So far, the HOPs in the demo are a variation of the progressive silhouette style, with grey scale pix rather than silhouettes. Each has an easy puzzle to complete within them. They are fun rather than challenging. I can remember only a couple of mini-game outside these HOPs, although there are of course the usual locks and codes around. Something that I can’t define as mini-game or puzzle, a diorama that you must move along by choosing the correct (exceedingly obvious) objects, begins the tale of the origin of the Three Guardians.

The journal is unique. It offers only character cards, which are added to as you gain information, and replayable videos. It will be interesting to see how that works out. The map is an interactive jump map, and hint is directional. So you have help for the many little errands you must run to get the items you need. This adventure component represents a larger portion of the game than other recent games have offered, but it is not difficult. There are 3 sets of difficulty options if you want a tougher challenge.

Finding pieces of the amulet increases your powers of magic in breaking down magic barriers and defending yourself against minions. One mini-game is associated with the amulet and crystals. To charge them, you must play 3 align-the-stars puzzles. These are easier than it normally is. And fun!

CE BLING!
There are 33 adorable squirrels to collect, plus 20 jigsaw pieces and 9 character figurines. These have achievements associated with them, as well as performance based ones. There is also an achievement where you must answer a simple question from the game. Each achievement gets you a piece of fresco and if you get all the achievements you can put together the final fresco to win the “ultimate” achievement.

There is a lot of concept art, very very good, and unfortunately not saveable. There are also some excellent wallpapers, and music. Heavy on the collectibles but a bit light on in the other standard CE bling! Of course, there is a bonus chapter and an in-game strategy guide.

COMBINED IMPACT
A very impressive game. The delightful artwork is combined with not-quite standard gameplay, it is relaxing and fun, and the story is intriguing. The whole package is so professionally done, I just want to sit and admire. *goofy grin*

JustTheFacts wrote:dammit, I knew this would happen! sat up late this morning doing the beta just in case it was released today, and fell asleep before I could write it up! Wake up this arvo, and of course, it's today's tgt!

$%#&^*&$#@$# Have to get my act together on these betas, and tracking jessica's playlist. You usually do that when it first comes out don't you genki?

Yes, I usually post it as soon as she puts it up, but she's erratic in her timing, so sometimes I forget

Hey, not your fault! I know where to find her - I think - I have just been lazily letting you find the playlist for me each week!


And how dare she be erratic about posting? Doesn't she know there are people waiting to grab her stuff for their own site? Deadlines, Jessica! Deadlines!

Mystery of the Ancients: Three Guardians (IHOG)
This is a standalone story with no link to the previous games

Options include separate sliders for Music, SFX and Ambients, Custom Cursor and Full-screen. Choice of three difficulties, which can be changed at any time.

You head to Green Hill after a frantic call from your beloved niece.  Her boyfriend has disappeared, and that's just the beginning... Flocks of aggressive crows have taken to the skies, and those whom they attack simply vanish.  Who is the man in the feathered cloak, and why have these people been taken?  You'll have to find the answers fast if you're to save your niece, her boyfriend, and the townspeople of Green Hill!

The story progresses through a series of short cutscenes.  Early on there's an interactive story book, and from there, there are places in the game where touching an item or placing items will start one of these narrated scenes.  It's really a nice touch, as it makes it seem like you're part of the story.

We don't exactly have a Journal... Instead we have character cards with gem slots.  Each time you discover more about the person, a new gem will be added and a new piece of background information will become available.  Also in this area you can rewatch any or all cutscenes.

NOTE: The "Journal" becomes unavailable once you complete the main game, so be sure to look at all of the information before you use your final item (it'll be pretty obvious)!

Be on the lookout for collectible squirrels and statuettes as you play~!

We find a damaged Amulet almost immediately upon starting the game, and this amulet is integral to both the story and the gameplay.  I don't want to spoil anything for you, so I'll just say that the amulet can (and will need to) be used whenever it starts to glow.

The MAP can be interactive, and has insta-teleport available.  Using a HINT during the adventure portion will either highlight an area, or show you the direction that you should take.

The Hidden Object Scenes alternate between highly-interactive find-items-by-silhouette puzzles to lightly-interactive find-by-list scenes.  For most of the game, you'll get a hand or a gear when you mouse-over an interactive area, but there are a few scenes towards the end where you're just going to have to figure it out on your own!

HOS do repeat, but found items remain gone when you revisit the area.

The puzzles range from easy to interesting to repetitive, depending on what you're doing.  There are some fun puzzles in there, but certain amulet-related tasks have repeating puzzles such as bringing constellations into focus by moving your mouse around, or lighting up all of the gems.  The only other puzzle type (that I can think of) that you'll be doing quite a bit of are connect-the-numbered-dots pictures (although they do mix things up to make them a bit more interesting later on.)

I really appreciate that the devs took the time to explain certain things.  Things like, "That water looks disgusting. I don't want to put my hands in it," and actually showing us that an action won't work goes a long way with me.  GREAT JOB, devs!

The soundtrack is really lovely, and although the music tracks are part of the CE content, I don't see an option to save. :(  Delving into the files I see that they're HTML docs that lead you to an .ogg file that you can listen to if you don't have the game installed.  That's something I suppose.

I was really impressed to see some appropriate emotions from the voice actors in the game... It's so rare to find in a casual game!  All of the characters (except one) were voiced very well.

The graphics are lovely, and everything from the artwork to the music to the voices to the sfx all felt beautifully-immersive.

The extra chapter is the true ending of the story, and starts three days after the main game ends.  The gameplay is mostly the same, but with a couple of key differences:  1. We have no amulet, and 2. The inventory is interactive in the bonus game. When you see a + sign on an item, you'll be able to zoom in and fiddle with it in some way.

The new locations were really interesting, and I enjoyed the bonus as much as the rest of the game.

I enjoyed the gameplay and environment so much that I played using no hints (except to test for a directional hint) and no skips.  All told, it took me almost 7 hours complete!  Although there are some repeating puzzles in there, the game is beautiful, interesting and fun to play.  Recommended!
_________________
Never be a prisoner of your past.
It was just a lesson, not a life sentence.