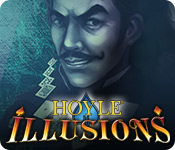 Embark on a new and exciting magical Mahjongg adventure! Enjoy a variety of tile sets, myriad levels, beautiful environments, layout variations and much more! Seek and find each level as you experience Sophie's story and the magic of Hoyle Illusions Mahjongg!

ENOUGH!! TWO almost identical mahjong games by the same developer on the same day, where the most obvious change is the way they spell mah-jongg? I repeat ENOUGH ALREADY!!!!

Do I sound outraged? Good, because I am. In concept, presentation and game mechanics, this game is identical to Mahjong Gold, also released today. I have gotten used to 8 Floor churning out near identical mahjong games every month, but that doesn’t mean I like it. This is going too far. Let me illustrate, as best one can with only standard text. *means actual differences [ ] is what I changed from my other review, which I did yesterday, not knowing what today would bring

This *magic-show mystery* [pirate]-themed game has the standard features I would expect in any mahjong game. This includes:

To progress through the levels you must meet the goals set for each board. These are:

1. Remove a certain number of gold tiles (the more non-gold tiles left at end of play earns more points)
2. Receive so many points (points are awarded on time taken between moves and involve a multiplier)
3. Complete the board in a set number of moves
4. Time taken to clear the board

What I didn’t see was an indication of the number of matched pairs available. I really love this feature. *There is an attempt here at a story, which was badly started, because I have no idea what it meant.*

I liked that, though not a widescreen game, it catered to wide screens by having wallpaper on the sides. This could have been more magical [piratical] though.

And forget the other nice things I said about the pirate game. If you must get one of these, get Mahjong Gold, although this one is slightly more relaxing.

And I wrote this BEFORE I found out about the Hoyle's Illusions IHOG! Now, gotta go back to bfg forums and sound off some more.
genkicoll

JustTheFacts wrote:by 8 Floor and a total rip off of the Hoyle's IHOG game and boring to boot.

Wait... This is Hoyle Illusions Mahjongg, and it's by 8Floor?  What the heck!