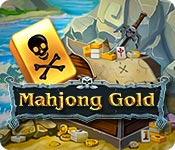 All hands on deck! Join in the search for Long John Silver's buried treasure in this Mahjong pirate adventure! Uncover the secrets of the legendary pirate as you travel around the world to distant lands, uncovering gold tokens along the way. Each level has been painstakingly balanced with special tokens and extraordinary missions that offer a whole new perspective on a classic game!

This pirate-themed game has the standard features I would expect in any mahjong game. This includes:

To progress through the levels you must meet the goals set for each board. These are:

1. Remove a certain number of gold tiles (the more non-gold tiles left at end of play earns more points)
2. Receive so many points (points are awarded on time taken between moves and involve a multiplier)
3. Complete the board in a set number of moves
4. Time taken to clear the board

What I didn’t see was an indication of the number of matched pairs available. I really love this feature. Also absent were options for showing the clear tiles. It also doesn’t attempt a story, other than the naming of the various locations. Which is good or bad news depending on your preferences.

I liked that, though not a widescreen game, it catered to wide screens by having wallpaper on the sides. This could have been more piratical though.

For me, the big difference between this and other mahjong games was the total disregard for the notion that it is traditionally seen as a game of relaxation. The pirate music is swash-buckling fun and probably deserved to be in a game involving the sinking of ships, but it certainly isn’t going to ease you into a restful sleep.

For all that, I love this game’s atmosphere. It makes for a lively and pleasant change.