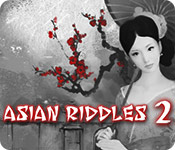 The charming world of Asia is awaiting its hero, and it is time to prove again that you are truly a master of riddles! More than 10 hours of gameplay and 144 unique riddles await you in Asian Riddles 2! Let the unique painting style, relaxing melodies and 12 different meditation halls take you away to an exotic land as you solve the riddles of the great Asian wise men once again!

FIRST IMPRESSIONS
This is the second in a new series of nonogram games (sometimes called pictographs, and the same type of puzzle as the Mosaics series). Like the first Asian Riddles, this game is sweet, delicate and peaceful.

SIGHTS & SOUNDS
Really, the only difference between this series and any other nonogram series is the atmosphere. Done in beautifully detailed graphics, with wallpapered borders instead of ugly black bars, the game is just a joy to look at. Likewise, the music is serene, Asian in tone, and ethereal. This is a very peaceful game. The one jarring note is that the games are timed and time constitutes the top score system.

GAMEPLAY
The gameplay is standard for this type of game and almost identical to the first. The ‘contest’ gives you a limited number of hints and allowable mistakes, and you play for coins, which you can use in the ‘shop’ to buy hints, or add allowable mistakes, or gain access to the next level. Each new level increases in difficulty, but the hints and mistakes allowance also improve.

To mark a tile as empty, it is possible to either change it on the interface at the right hand side, or right click. I like the tiles the game uses, as they look like tiles, and the sound effect putting them down is appropriate.

To begin with, the game is incredibly easy it seems, but the limited number of allowable mistakes and hints available makes it a bit of a surprise. It doesn’t take long, anyhow, to move from 5x5 grids, to 10x10 grids, with none of the dead-easy 10x10 grids that are normally used to ease your way into trickier grids.

There are 12 rooms containing 12 levels in each. Your performance is rated using a three-star system, and you must get all 36 possible stars to move to the next room – unless you buy your way in. You can repeat any level as many times as you like to get the full rating.

The one major difference with this game from the first is that it does not seem to have trophies, so far as I could tell.

VERDICT
I am not good enough at these type of puzzles to be able to compare the degree of difficulty at higher levels, but at the lower levels, they do seem to be more difficult than other games like this.

If you like these sorts of games, and especially if you could use a challenging one, I think you’ll love this one. But don’t be put off by the challenge. It is a flexible game, and you can learn as you go.

As with most of this developer’s games, it is definitely zen.

I demo'd this yesterday and bought it. The timing isn't obvious and so far hasn't affected me in the slightest; I'm finding it so serene and relaxing. I have one of those World Mosaic puzzles and find Asian Puzzles so much prettier and absorbing (even though they're the same type of game). As the game climbs to its hardest levels, I find it challenging but doable... but then I like nonograms and the like. Good edition if you like these kinds of puzzles.

I agree. It is lovely isn't it? I enjoyed the first one a lot too. Another I really enjoyed was Zen Mosaics at iwin. For me, though, these puzzles still present a challenge even early on. Although I do okay once I get into it.

I have a couple of these ones too, and I like this better than Mosaics. The most fun for me is Arizona Rose. I have promised myself I'll not buy more until I can make a serious dent into the ones I have

, but I keep the demos after I've reviewed them based on only a little of the hour, so I can play them when I'm in the mood for something quiet.
genkicoll

Yup, sorry, I'm not yet into the habit of automatically putting in the developer yet
genkicoll

I can easily find the mainstream developer names, but not so much the smaller devs.  I knew that the first Asian Riddles was done by 8Floor, but I didn't want to make any assumptions

JustTheFacts wrote:The most fun for me is Arizona Rose. I have promised myself I'll not buy more until I can make a serious dent into the ones I have

, but I keep the demos after I've reviewed them based on only a little of the hour, so I can play them when I'm in the mood for something quiet.

Don't get me wrong, the advanced levels are not all that easy for me. It's just that I like to take my time and work them out. Like doing Sudoku puzzles, which I also love.

I didn't find the World Mosaics series all that relaxing... it might've been the music or maybe the theme, but it soon began to feel like drudgery. This game, however, is altogether peaceful. I may have to get the first Asian Riddles as well.

CORRECTION - The game I own is World Riddles, not World Mosaics. Perhaps the latter is a better series? It's certainly more popular. I feel like I've demo'd a couple of them in the past; not sure.
Sponsored content