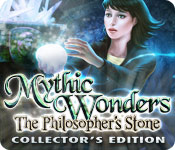 You are awakened by a strange premonition concerning your uncle. Your intuition tells you something is wrong, and the project you were collaborating on may have put his life in danger. You will use the portal you built together to enter a new and mythical world, and along the way, you'll discover the secrets and powers of the Philosopher's Stone! Explore magical realms on your journey to save him. Overcome obstacles created at every turn by a strange and magical creature. Who is he? What is his agenda? Perhaps not everything is as it seems.

Re: Mythic Wonders 1: The Philosopher's Stone

FIRST IMPRESSIONS
Than most of the other delightful fantasy games released last year. And this one is a delight. The opening cut scenes set the standard. High quality graphics, more beautiful than pretty, with an emphasis on realistic animation and totally imaginary images!

For those of you worrying, is this another cute pet game? Well, so far the only animals, mythical or otherwise, have been a particularly mean and salivating Cerberus and a morphing spider.

I love that the main menu’s background is of a very realistic, though moving, nebula.

SO WHAT IS HAPPENING?
You and your uncle have built a portal from plans found I know not where, but which you believe is the doorway to other realms. Well, you were right, but of course, Unc got himself into trouble and you are going  to have to help. You find an artifact that reacts with the portal, and when you put in a series of code symbols, you are into another realm. A sinister someone/thing makes it clear you are unwelcome, and that you will never get “The Stone”.

SIGHTS & SOUNDS
As I said, the graphics are great. Not the Wow! Kind, but very well done, beautiful and clear. And the imagination used in creating the different realms – marvellous. The voiceover is clear and bright, but just a little too much to sound realistic. Still, not difficult to listen to. The other sounds and music are also lovely without being outstanding.

GAMEPLAY
I do like the HOPs in this game in particular. There are interactive word lists. Also multiples and pictures to find. These last two are as interactive as a typical word list, but there is no indication of which ones are affected, which makes it a little more challenging than other HOPs of that type. For instance, when looking for 12 beetles, you will need to shake things, open things and fix things to find them all.

The journal has notes, objectives, achievements, the artifact’s details, and unfortunately, the interactive jump map. It’s a hassle to get to it. The hint is directional.

I didn’t find the puzzles too difficult yet, but they were a bit more challenging than in comparable games. Still I didn’t skip or use the SG for any of them.

CE BLING!
Fairly ordinary. 1 Screensaver, 17 wallpapers, 13 concept art (sketches), 10 music tracks. There are a fair number of achievements, and they are of the standard types. The collectibles are REALLY challenging. I did not get a single one, even though the tutorial pointed out the first one for me (the spider). They are well integrated, and morph slowly.

LAST WORDS
This game is a good CE game, a pleasure to watch and a little bit tougher than most fantasy games. Still, not spectacular.