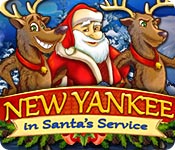 Mary goofed when casting a spell and scattered Santa's reindeer with a loud KABOOM! Now the bearded one is demanding she and Johnny collect his sleigh pullers before Christmas Eve. Find the missing reindeer to avoid a Yuletide cancellation!

Find Santa's missing reindeer to avoid a Yuletide cancellation! When Mary cast the spell that was supposed to take her and Johnny home at the end of New Yankee in King Arthur's Court 2, she goofed and scattered St. Nick's reindeer with a loud KABOOM! Now the bearded one is demanding Mary and Johnny collect his sleigh pullers before Christmas Eve. As you guide the hapless heroes and a band of merry elves through a winter wonderland, you'll need to carefully manage your time and resources. Plan well, and you'll be ready to defend your ground when evil Snowmen, cackling Ice Witches, and deadly Yeti attack! Don't miss this instant holiday classic!

Released at BFG as

Not having played the New Yankee In Arthur’s Court games, I wasn’t too sure what to expect, but figured some kind of resource game. I am still reeling!

Santa’s pretty mad at us, losing his reindeer at Christmastime, so we better get on with finding them. And fast!

This is not the sort of semi-relaxed game I’ve played where, even if there are time limits, going over them won’t stop you playing on to the next level. And this one doesn’t either. But it’s not relaxing. Along with the wood that needs cutting, the food that needs harvesting and the roads that need clearing, there are also polar bears eating your crops, crazed snowmen attacking your elves, ice witches, reindeer that are not all that keen on coming in out of the cold, and a zillion other obstacles to be overcome.

What’s kind of cool is that Johnny only fights off the enemies and Mary only casts spells (which speed up production, replenish resources, etc.). So you are keeping track of their work separate from what the elves are up to building, growing, mining etc. Which is why it is so compulsively frenzied even if you’re ignoring the time.

All in well drawn, bright and cheerful images, with animation that is fun, and funny, to watch. A music track that cranks up the adrenalin, and crazy cheers and whistles every time you achieve something on the task list. All this makes this game more like a roller coaster than a sleigh ride. (Still, how would I know, I’ve never even seen snow!)

Are all the New Yankee’s like this? Oh my!

Having played (and survived) 10 levels of the game (in 45 mins, I know, don’t laugh!) with, as yet, no need to replay a level (unless I want to gain my gold Santa stamp), I can honestly say I have no idea what’s going to be around the next corner. As for the reindeer, there has been one so far, and he’s not been overly happy to see me.

Allegedly, he’s my friend for life once I feed him, but... boy, can he eat!

This is a hilarious game in spirit with the season, and I figure just about anybody who plays time management/build/resource management games is going to enjoy this one - if they’ve got the stamina after Christmas lunch!

I have discovered time management games over the past couple years and to my surprise have liked quite a few of them! Not the crazed Diner Dash-like clickfests (I'll never like those

), rather the more thoughtful strategy-based ones. But I also have really enjoyed ones without timers that I can just relax and take my time playing, one de-stressing level at a time. Yes they're fairly repetitive but some of them are just so appealing and funny. This one sounds like it fits that category and I'll be trying it out. Thanks for the review!