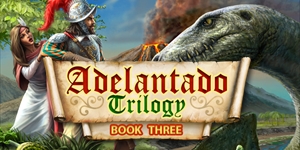 The sequel starts where the previous part left off. Don Diego finds himself on top of the high cliff. There he comes across a stone that tells the story of these ancient and mysterious lands and its beautiful but dangerous inhabitants. Despite the risks that lay ahead the brave explorer has to push forward and finish his quest to find the lost expedition.

On his way to a gigantic volcano visible afar our brave hero will be accompanied by his fellow crew members. Together they will build forts, discover ancient ruins and never-before-seen creatures of the forest, defend against the Neanderthals and help the locals.

I've got a PCC with this game's name on it it, as soon as it gets to Big Fish.

Me too! I am not a TM person, but I love this resource management (?) game! While I've come to like a couple of other build games, this will always be my fav
JustTheFacts

BASED ON PARTIALLY COMPLETED GAME

I didn’t even have to think about it, my fingers had already hit the buy button before I remembered that it is bonus punchcard Monday! This just never happens to me, even with games I know I’m going to buy. But the AdelantadoTrilogy is unique among build style games in being able to keep me up late to finish ‘one more level’.

This game continues the tale from the first two books of Adelantado. Don Diego is still on his quest to find the lost expedition, and he’s got some strange new challenges ahead, the most immediate of which are dinosaurs of all varieties. The cavemen are still raiding the camps, but not in the first few levels.

The game is an identical replica of Book Two, but with added structures, production goods and new gold transporters. The graphics and animation are the same high standard. Even the music is the same.

My favourite thing is this game is still that you can play it in 3 difficulty modes, or play it untimed. Something for everyone.

Some of this game’s other features include:

1. You control Don Diego, while he controls his men. So you can queue for yourself, foraging for hidden gems, for instance, and while keeping occupied with that, direct the action for all your building and production men.

2.You can demolish, restore to peak efficiency or upgrade most buildings. So when the woodcutter runs out of wood, you can reutilise the space. Which is very good, because as with the first games, space is the biggest problem.

3. There are again new buildings such as healer’s huts to add to your productive value.

4.There are gods that provide short term power ups such as increased speed or productivity.

6. The levels are long and increase in difficulty.

The first chapter is still the ‘hand-holding’ forced building program where you can only do as instructed, but in level two you have almost complete flexibility – although you must have unlocked structures and so on, as with the other games.

I am already really enjoying this one, even though I am only at chapter 3.