Behind the Curtain: The Making of Awakening Kingdoms
Big Fish blog article from December 12, 2013 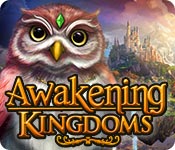 Have you ever played the Awakening game series? The Awakening hidden object puzzle adventure (HOPA) series is a story set in a light fantasy theme about a girl named Sophia who slept for a hundred years. When she woke up, she found no other humans and learned she was the only one born without magic. She went on a journey to find her people and discovered that she is the heir of the Skyward Kingdom and that her parents were captured by the evil Dreadmyre. On her way she discovered more about the magical world and encountered different kinds of creatures, who we’ll get to know more closely in our latest free-to-play game.
Awakening Kingdoms continues from the story of Sophia freeing the Skyward Kingdom from Dreadmyre and continuing her journey to free her parents. In her absence, she now entrusts the kingdom to you. Last week, I was able to chat with Ran Wong and Rachelle Herrera of Boomzap Entertainment and get their perspective on what it took to make Awakening Kingdoms ! 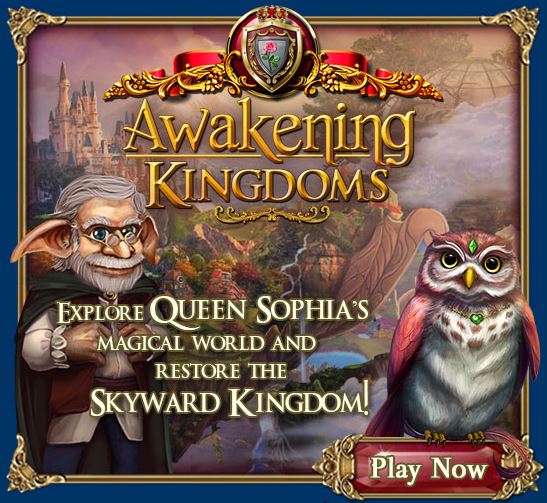 Please introduce yourself & your development team…
Ran: I’m ‘Ran’ Wong from Singapore. I’m a designer who’s led several Awakening projects and helped kick start Awakening Kingdoms.
Rachelle: Hi, I’m Rachelle Herrera from the Philippines. I’m responsible for designing, scripting and writing quests for the game.
How did you come up with the concept for the new Awakening Kingdoms? What inspired you to take the Awakening series in this direction?
Ran: The world of Awakening has always hinted at greater things, and always had the potential for many more adventures. All those untold stories out there, all the potential lore to be told was too good to pass up.
Rachelle: Awakening has always been a known Hidden Object series. We’ve tried to combine all elements that the Awakening series has and make it into a hidden object game that allows you to build and improve your kingdom and at the same time, still be able to play the minigames and enjoy the story we loved in the Awakening series. 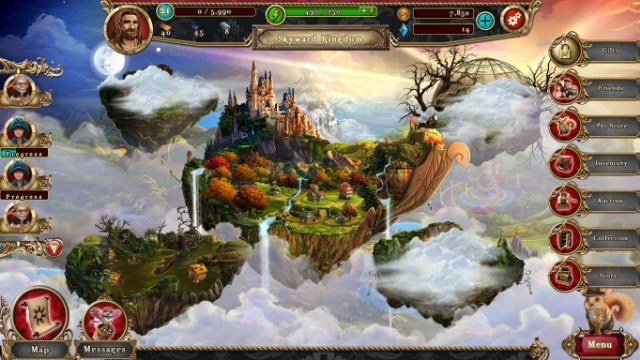 Will the new Awakening Kingdoms continue the story from where the last one ended?
Ran: Awakening Kingdoms was meant to tell the story of the human kingdom after Sophia passes through on her quest for family and answers. We’ve always been curious what happens to a place after the hero/heroine is done with it, and this is one of our forays into that.
Rachelle: The presence of story elements from the previous Awakening series will still be in the game. But it will focus more on you being Sophia’s Steward on a quest to help restore the Skyward Kingdom.
What should Awakening fans be excited about in this new version?
Ran: Imagine if all the familiar faces from the previous adventures had lives, continued from when the player last met them. They don’t just disappear when Sophia is done with them – they continue to have an impact on the world and tell their stories. New faces also appear, with new roles and stories!
Rachelle: Awakening fans would enjoy seeing previous characters appear in game! They would be able to interact, complete quests and learn more about the characters. It’s like an extended version of Awakening, full of possibilities and new adventures! 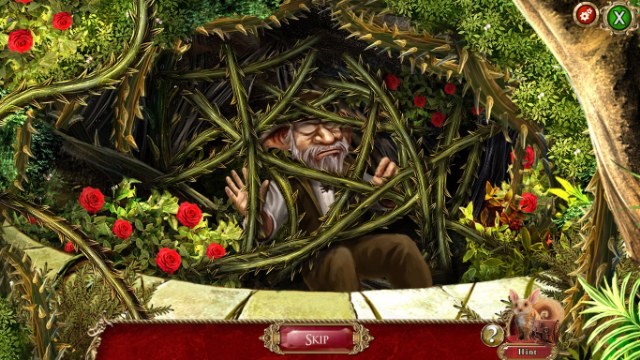 Is there anything you can do in a Free-to-Play universe that you cannot do with a premium game?
Ran: We can continue to add more premium and free content, seasonal bonuses and promotions, and expand on the game without changing the core game. Players who want to keep their experience free won’t be forced to pay for the premium content, and still enjoy most of the content released.
What are the biggest technical challenges you had to overcome while making this game?
Rachelle: The technical challenge for me was integrating the features of Free-to-Play based from another Boomzap game, Antique Road Trip: American Dreamin’, and also adding new design ideas to make sure it fits with the fantasy world of Awakening. 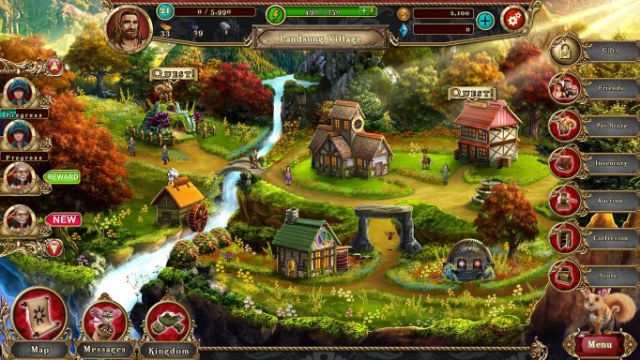 What is your favorite feature of the new Awakening Kingdoms?
Ran: I like rebuilding the castle. It’s nice to finally see something restored to its former glory in Sophia’s kingdom without an evil villain trying to tear it down.
Rachelle: Having mini-scenes inside HO scenes is something that other Free-to-Play HO games don’t have. In Awakening Kingdoms, you have to unlock these mini-scenes by doing a quest or playing a minigame to open it. I think it adds an additional challenge and fun factor to open these mini-scenes and see what’s behind it.
What is your favorite thing about the Awakening universe?
Ran: How a mundane human could possibly deal with all the magic stuff when having magic is the norm. Also, being royalty doesn’t hurt since you can create situations where some people fawn over you, and others just treat you like a normal person out of ignorance.
Rachelle: I’ve always been a fan of fantasy and I love the music in the game – it really adds a fantasy feeling and it’s so relaxing! I love to explore the beautiful sceneries and work my way through the hidden object scenes and minigames to know what’s happens next in the story. 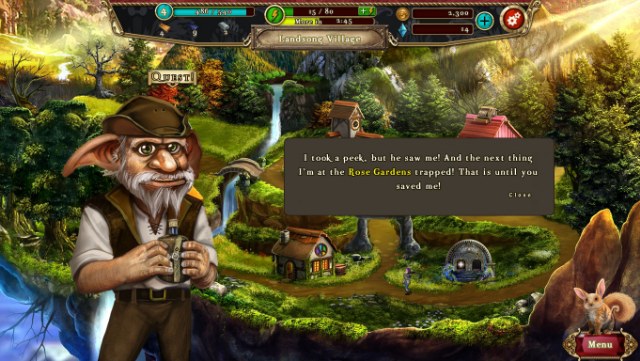 What does the Awakening Kingdoms team’s approach to developing games do you feel sets you apart from other developers?
Rachelle: This is the first big game studio I’ve worked with so I’m not sure how other developers are doing it. We always have daily builds on our working days so it adds to the productivity of being able to add something new for the game and to be able to test it immediately. Feedback within the whole company is helpful. Teams from other projects get to give feedback on another game’s project so in a way ideas are shared across the company. BFG team has also been helpful in giving additional feedback to always help improve the game.
What do you find is the best approach for starting a new project?
Ran: Generally we think about the world and what cool things (i.e Mechanics) we can do in it first. The story is generally planned simultaneously alongside these mechanics and ideas so we can flesh out the history and world, and how things work in it for a more consistent universe.
What source provides the most accurate critique or feedback?
Rachelle: I enjoy getting feedback from new players. Being able to hear their first impression on the game and how it feels allows me to learn and adjust. During designing a game, you get to play and test the game repeatedly that you sometimes overlook some details that a new player who has played the game the first time.
Ran: External parties with minimal prior experience with the game, our customers, and feedback from the publishers are our most valuable assets. The best feedback tends to come from playtest videos where we can observe common points of difficulty in a player’s experience and smooth it out for them. 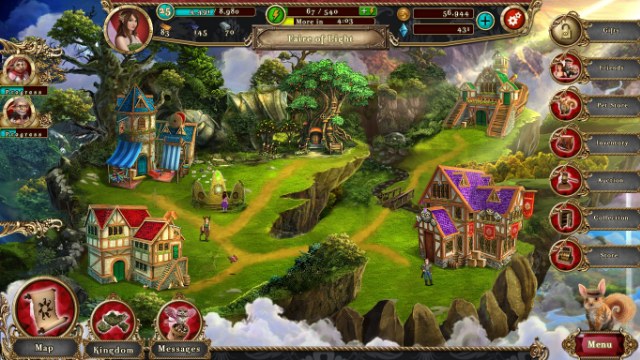 What are some of Boomzap’s short and long term goals?
Ran: Short term, our goal is to create a series of titles that our users love and can relate to, and which they enjoy playing. For the long term, ultimately we want to create a sustainable line of products to stay afloat and keep us all employed of course, but receiving positive feedback from our games is ultimately what keeps us going towards the long term goal.
If you had the world’s attention for one sentence or thought, what would it be?
Ran: Do what makes you happy if you can help it at all. In work or in life.