Midnight Macabre: Mystery of the Elephant

Midnight Macabre: Mystery of the Elephant

Midnight Macabre: Mystery of the Elephant
by Dango - December, 2013 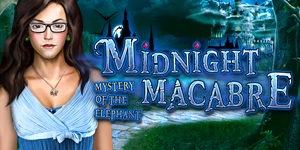 Helen must save her young daughter Cathie! What evil creature has snatched her away and what fate awaits mother and daughter? Play as Helen and unravel the mysteries of Midnight Macabre – Mystery of the Elephant, a chilling and dark hidden object adventure.

As Helen, you and your daughter Cathie take a walk through the park on a beautiful day when a young, innocent-looking boy confronts you. Soon you discover he is not so innocent after all. Holding an elephant artifact above his head, he activates some evil magic that takes Cathie right out of your hand into a mysterious vortex. Now you must unravel the mystery and save your beloved daughter before it's too late.

I hope this gets good reviews.  I trialed it at GameHouse and wasn't pleased with it, although I'm sure it was my idiocy that was the problem.

In the very first HOG scene, one had to answer the phone, which rang interminably until I figured out I had to click on the button on the phone and then slide it completely to the right.

Then, in the next scene at the gate, I couldn't back out of that scene for the life of me.  When I finally did, the HOG at the first scene I found to be too dark to see well, even with the use of the flashlight.  Deleted the trial, hoping I was wrong, and that the game is lovely.
JustTheFacts

Doesn't sound promising. I will go check it out too, when I am in the mood!

Get Out Your Punchcard Coupons

FIRST IMPRESSIONS
Don’t be mislead by the opening cut scenes for this game, which are basic, primitive, barely animated at all, just cartoonish art swirled around a bit really. The rest of the art is much much better. Still, it is a fairly cheaply put together game, and it is not a masterpiece. It does, as the blurb, remind me of older style classic HOGs.

SIGHTS & SOUNDS
Apart from the intro, the graphics are beautiful. Extremely sharp even on my large monitor, very clear, but also very dark. Not dingy, there is plenty of colour, but darkness shrouds everything in this game. This fits the mood of the game exactly. It is a dark one. There is not much animation anywhere in the game, least of all in the HOPs, and I miss it.

The voiceovers at first seemed quite reasonable but soon became, well... the girl’s scream was so poorly done I was embarrassed. And the mother has too many ‘statements of the obvious’ – “I must find my daughter!”, that sort of thing. The sounds in the background are pretty good and the music is harmless.

WHAT’S HAPPENING?
A small boy wielding an elephant toy kidnaps your daughter into another world/dimension something, and you follow, of course. Trying to find your daughter you find an empty castle, and eventually the boy. He tells you a story about him and the elephant that seems to have no connection at all with the vampire (perhaps) master that makes him steal the children, or how he does it. The elephant’s story so far is only terribly sad and left me feeling quite depressed at the end of the demo. Although I admit, I am curious about what happened/s.

GAMEPLAY
Typical HOPA. Nothing very new or at all difficult. The HOPs are interactive lists where the interactive items are NOT highlighted. Or silhouettes. The puzzles balance the HOPs and are familiar. There is one puzzle at least that does not have a reset button that it really should have. However, when you run out of moves, it resets itself with a “you lose!”. Another puzzle is a simple match-3.

The adventure is basic. Inventory items are found with HOPs and puzzles, with only a few lying around, and they get used quickly. There is a jump map that does not indicate anything about your tasks. There is no journal. Tasks are available by clicking a rather neat little question mark in the top right corner. The hint is directional, and I found it useful. The demo took me 35 minutes on the easiest of 3 difficulty settings.

The bad news? Well, the game does not hang together properly, partly because the story does not make sense at this stage, and partly because the integration of puzzles etc. isn’t handled very well. There are occasional lapses in localisation (a lamp is not a light bulb). To close a close up window you must use the “x”. The cursor doesn’t change when you are going to another location. And the limited animation does drag the game down a bit.

COMBINED IMPACT
For me, this is a nothing-much kind of a game. The graphics are certainly a treat, particularly in a stand-alone SE, but the rest is pretty ordinary. It will not be on my wish list, simply because I couldn’t form any strong opinions about it – and my wish list is already too long! Many of you are going to like it, some will even love it. I’ll be interested in seeing the reviews on the completed game.