Death at Cape Porto: A Dana Knightstone
by Boomzap - November, 2013 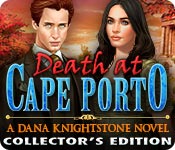 Return to Europe in a brand new adventure as Dana Knightstone, the best-selling novelist with a gift for clairvoyance. A tragic legend attracts you to Portugal, where you were planning to set the backdrop of your latest love story. But upon checking into a mysterious hotel, you discover that your abilities are not just limited to interacting with ghosts.

Delve into a past obscured by untruths that have imprisoned an innocent soul who, without your help, will never have the chance to clear his name. Find clues buried in old newspaper clippings and collect useful items as you explore the romantic locales of Portugal.

FIRST IMPRESSIONS
The developers tried a little too hard, I think, to make this game seem more scary than the previous Dana novels. Or, at least, the intro cut-scene, which was out of character for this series, and didn’t quite come off. For me, I was too busy registering my shock at a Dana game with poor graphics – IMPOSSIBLE!

SIGHTS & SOUNDS
True, the poor graphics only lasted as long as the intro, but it was an unpleasant surprise. For the rest of the demo, the locations, and particularly the city lights at night , were breathtaking. Very much what you expect from this developer. The voiceovers were well done, as always. But the guy you first speak to gets your back up straightaway with his condescending tone – this is of course deliberate, as you will see. The music is romantic, almost dreamy.

WHAT’S HAPPENING
We are attending the opening of a new hotel when  we find ourselves being drawn into the past (literally) by an ancient newspaper clipping. What we find is a standard Dana Knightstone love tragedy, and we must redeem the innocent soul. This is done a bit differently than in previous games of this series, and I like the new style. Now, when we observe part of the past , we do so in sepia tones, and with fuzzy fades around the view. Much more dramatic.

MAKING PROGRESS
The few HOPs in this game so far are straight interactive lists, but there are not many of them, and we do not repeat. The puzzles are much more innovative than I have seen in the other Dana games, some were frustratingly tricky. All of them look great. Also some nice twists on older games.

There is hint system that will show you where to go next and offer to teleport you there. There is also an interactive jump map that tells you where you have active tasks. The journal gives you both a diary and an objectives list, as well as replayable movies. These have important info in them sometimes.

The game consists of 6 chapters plus the bonus, and I only just finished the first chapter when I stopped with 8 minutes to spare. As for CE Bling!, there is nothing very exciting: Bonus chapter, Strategy Guide, and Gallery Items, (fairly ordinary) Achievements and Collectibles (40 large playing cards).


FINAL VERDICT
I liked this demo, better than previous Dana Knightstone games, actually. But I never have thought of the games in this series as CE-worthy, and this one is the same. I think it will make a good value, enjoyable and intriguing SE game. THAT I will rate higher, and will recommend. This one...

I Don't Recommend This Game!
RenaissanceMom

Thanks, Justy! I did something I never ever do, which is to buy without a demo - and the CE, no less!

But it was part of the Black Friday sale and I used 2 monthly credits that had been sitting unused. I normally enjoy the DK games so I got this plus the new MCF without any add'l payment. I'm disappointed to hear it prob won't be worth it but, whatever.

You'll probably still enjoy it, but the bonus game is where you may be disappointed. It was just such a tacked-on entry. I will be buying the se when it comes out, so it can't be all bad