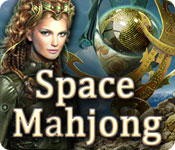 Travel through the cosmos, visit strange and wonderful alien worlds, and encounter fantastical creatures in Space Mahjong! Explore seven different and challenging Mahjong styles each with their own artistically produced environment.

FIRST IMPRESSIONS
The game looks nice enough from the beginning, but it is nothing spectacular. There is no real feeling of being extraterrestrial. And of course they were covered by the board anyway, and there is only one new background per level. The music is likewise nice, not stunning, and eastern meditative rather than exotic. It also got boring and irritating quite quickly.

There is not even a hint of a story.

MAKING PROGRESS
The game plays as most modern mahjong games do. There are 7 gameplay styles including:

and 3 others I don’t have names for.

I found the ‘logical pairs’ were not all that logical actually. The game progresses with points awarded for each (replayable) level, high scores and trophies.

You must play a total of 14 boards (2 x 7 types) before you can unlock the next level. You have hint, shuffle, undo, button, along with the no. of matches, no. of tiles. Each board can be trashed and replaced at any time, and you can replay them immediately or at a later time.

BOTTOM LINE
All standard mahjong stuff. I see nothing compelling with this one. But if you’ve grown bored with your other mahjong games...

JustTheFacts wrote:genki let me know if you are not particularly keen on me cluttering up your files with obscure little games like this one. I like doing reviews for them, and you're getting everything I do now (the good the bad and the ugly), but maybe they're just in the way here?

Not at all, Justie!  I enjoy reading all of your reviews, so keep postin'~!