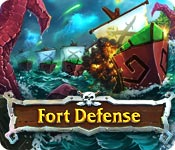 Welcome to the unique pirate-style tower defense. Now the battle rages on by land and by sea! Take part in an uncompromising struggle repelling freebooters' assaults. Watch out, the enemy may catch the tide and ruin your fortress. Build towers, collect crystals, upgrade spells and believe in your victory in Fort Defense!

It has been a long time since I tried to play a tower defense game and it seems I haven’t gotten any better at it!  Still, I held my own until the time ran out, and was having a good time at it, so I figure this is a good game.

I’ve nothing recent to compare it to, but this one seems attractive, with clear graphics and continually new locations. You must defend the coastline and the fort by placing defensive towers around the shores and nearby islands.

As you level up you get towers with more power,  spells and mines to provide more gold for upgrades. The enemy (pirates of course) also upgrades its units. Wiping them out scores you points and coins and very occasionally barrels. Barrels can be used in the shop to purchase power ups such as increased gold at the start of a level. They seem darn hard to come by.

I would have liked a better tutorial. While I know that most people playing this game will have played similar before, I found it less than helpful, as it didn’t explain what I was doing at all.

It would have been nice, too, if the pirates had a more piratical look about them, and the shoreline was a continuous stretch of land that we moved along rather than totally new locations each time. Although I did like the land vs sea aspect.

I guess that’s just me, I am so used to playing nothing but HOPAs that I feel the need for a story in any game I play.

All up, not bad. I suspect there are better tower defense games out there, but I am equally sure there are a lot worse.

JustTheFacts wrote:I think it is a tower defense game...

And I think this is the right place for it?

Yep, you got the right place!