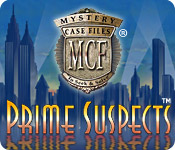 The Queen's Hope Diamond has been stolen! It's up to you to  search for clues throughout 22 levels, find the offending culprit, and  recover the stolen gem in Mystery Case Files: Prime Suspects

. Expand  your
investigations through the game's 29 unique locations by finding  items that will unlock subsequent levels. Thousands of clues are  cleverly hidden within the beautiful illustrations, creating a new game experience each time you step into this masterpiece of visual  indulgences!

FIRST IMPRESSIONS
Well, you know, 2008 is a long time ago in the world of games, so it should not be a surprise to anybody that this is a simple HOG with awesomely awful graphics and no ‘bells & whistles’. And, for me, blindingly boring gameplay. For what it is, though, it is still very clever.

SIGHTS & SOUNDS
The HOP scenes are some of the most junky and overstocked HOP scenes you’ll ever see. 100s of items without rhyme or reason, or any connection to the story. Distorted objects, some half hidden behind other things. And some very, very tiny items as well. But somehow, I managed to find all the items on the lists without hint most of the time. There is no animation or interaction, so the scenes look very flat and lifeless. The atmosphere is created by the background sounds. These are on a separate track, so you can adjust for your own preferences on music, sound effects and background noise. The music is like the visuals. There seems no connection between it and what’s going on.

WHAT’S HAPPENING?
Someone has stolen the Queen’s Hope diamond, and you are on the case. You must narrow down a list of 21 suspects by establishing where each of them was at the time of the crime.

GAMEPLAY
For the most part, this is standard HO gameplay of the time, with 22 levels involving 30 locations, each of which is visited 3 times over the course of the game. What makes this game unique is the packaging. Each level represents one suspect, and you receive some (very amusing) background data on the person before launching into a search of the areas relevant to them.

So, first, the info. Then, at each level, a number of search locations on a map, with a number of objects needed to be found. Each new level includes more locations, and higher levels revisit earlier ones. There is a (very generous) time limit, you score points per level, and you have a limited number of hints per level (5). You only need to get most of the objects listed, usually 2-3 less than the total. At the end of the chapter, you complete a picture puzzle that tells you where the suspect was at the time of the heist. This is MCF, so it’s not skippable.

As the levels progress, they become more and more complex, and you must do more than just find the HOs, or must find them using unique tools or in different ways (e.g. multiples of). Ultimately, though, it is all about the objects.

COMBINED IMPACT
I wasn’t around at the time this game was released, so I don’t know how it compared to others, but even today, many of the strictly HO games are less interesting in the way they present their levels and locations (I’m thinking of series like “Big City Adventures”, where you just seem to go round and round the map and its 25 locations).

I can’t handle the graphics, and am not a big fan of pure HOGs in any case, so I’ve played it, and will probably never play it again. It is an interesting artifact for my game collection, but I can’t recommend it for its fun value.