The Torment of Mont Triste
by Sulus Games - October, 2013 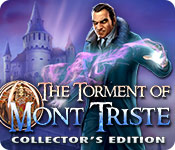 Stop the terrifying Lord of Nightmares in The Torment of Mont Triste! After a scientific experiment goes horribly wrong, a shadowy figure begins appearing throughout the town of Mont Triste, bringing the citizens' most terrifying visions to life as they sleep. They call him the Lord of Nightmares. Local authorities are exhausted and helpless against this otherworldly threat. They have enlisted you to come to the picturesque mountain town to solve the bizarre case. You must track down the villain and stop him before the entire world becomes gripped in a terrifying nightmare. After all, everyone must fall asleep eventually... can you help the citizens of Mont Triste awaken?

It’s another ‘mad scientist’ story – or is it? Certainly the idea that we can bridge the gap between real life and dreams sounds pretty nuts, but he doesn't SEEM crazy...

That is the introduction to the game, but it quickly takes on more mystical/magical overtones when the Lord Of Nightmares interrupts the experiment. A powerful scary something, he captures people’s nightmares and makes them real.

Your job is to track down and defeat this monster, and the way to that is through people’s nightmares. As you step into each one, you must resolve the dreamer’s dilemma to lift the Lord’s curse.

This game is beautifully crafted, with lots of colour and life. There are plenty of lovely objects, from flowers to puppies, but it is beautiful rather than pretty, and while the puppies etc. are definitely cute, they don’t hang around after your one interaction with them. The HOs are bright, crisp and detailed.

The soundtrack is interesting. The music is quite different from what I’m used to, and often you are left with no music at all. Sometimes there are ONLY sound effects. In snowy scenes this is really effective. There are some excellent voiceovers as well, and they don’t try for lip sync – the characters’ mouths are still. I much prefer that to a botched lip sync.

There is a balance towards puzzle/mini-games, with 12 HO puzzles and about 35 puzzles, and away from adventure and quest style gameplay. The HOPs are interactive list, with quite a few interactions required. The puzzles are mostly familiar, but some are redesigned to make them more difficult (such as a more difficult matching pairs memory game), and others are just presented in a unique way. There is a directional hint, and an interactive jump map. The map annoys me – it is supposed to show ‘areas of interest’ but often doesn’t in places I think it should.

Achievements are many, and include each of the 21 goblin collectibles. The SG was a help the couple of times I looked at it. There are the usual gallery items, including:

I am convinced I will enjoy this game, but I don’t expect to be floored by it. It’s a good game, and ...


I Recommend It!
luvtoread

I beta'd this awhile back and I just did the demo on it.   I am on the fence about getting the CE-even with the 2 for 1 sale.
genkicoll

Thanks for the topic and the review, Justie!

I just wanted to point out that this is the second in a series!  Scroll up to post #1 to see~

Thanks for mentioning the second in the series. I was wondering who the developer was.

Now, I'll have to demo and hope I don't run into any tech problems.
genkicoll

Well the BOGO sale will still be working on Monday, so hopefully they'll work out the kinks by then!
_________________
Never be a prisoner of your past.
It was just a lesson, not a life sentence.

I remember the Torment of Whitewall.   I never finished the Bonus as it did turn into a Torment for me.

The main game itself wasen't all that bad.
JustTheFacts

I didn't even twig to that first one, even tho I thought about what they'd call the sequel !

lol~ That's exactly why I started reviewing!  'cause I suffer from CRS aka Can't Remember S...tuff!

lol but you've played so many that's not surprising! Me too, these days.

I love your sig. Big fan of the Rocky Horror Show - actually dated (well sorta, it's complicated) Richard O'Brien (writer/director) a few times in my younger days. He used a false name when he saw me and only fessed up when he let slip that he was going to be a supporting actor in The City.

Nice, if a bit wacky, bloke. I always enjoyed his company.
genkicoll

Oh, how fun is that?  You know that he actually WROTE Rocky Horror?  Not surprising that he'd be a "bit wacky."

Thanks for the review, Justie.  Because of you I chose this as my second game for BOGO weekend.  (I have limited internet so usually don't tryout games before buying.)  I don't mean to put any pressure on you, but I find that I trust your reviews.

I find that I trust your reviews.

And that would be the second reason that I decided to start writing reviews, and also the reason why I invite others to track their reviews here at GGG.

Some reviewers we never agree with, and others we know have tastes similar to our own!  It's so great to be able to easily get to those reviewers' contributions... and it's sure nice to be able to find my own reviews with one simple click!
_________________
Never be a prisoner of your past.
It was just a lesson, not a life sentence.

Wow! Somehow I missed your comment about my reviews, justgaming. Thank you. It makes the sometimes tedious effort all worthwhile, when I know people are enjoying my reviews, and trusting mine is the highest compliment you can pay me.

I do hope the game was enjoyable! Was it?

I came in looking to update my impressions having just completed the SE demo - I had some hesitations about this one, and I am still sort of iffy. CE vs. SE. I try not to buy too many CEs, and this one is on the edge.

So would welcome your input! In the meantime, here's what I thought second time around. (Lucky lucky people - you get to hear me babble on every day uninterrupted!

BASED ON SE DEMO

(aka Review part two - I'm practicing on you guys now!)

When I first reviewed the CE of this game, I noted that the makings of a good CE were there – professional production, great graphics, solid story, collectibles and achievements, and, for me at least, nice wallpaper. Still, on a budget, I have waited for the SE before making my buying decision.

Well, having played both demos (which on each took 50 minutes, no lollygagging), I think I must recommend the CE. There is just “that something, something” lacking in this game. And the extras make up for it. They give it that little bit of zing.

The game is beautiful, definitely. And imaginative. And so very alive – everything is richly detailed and well lit. The same can be said for the background noises, special effects and music. All satisfyingly animate. The voiceovers are excellent.

The HOPs are very good. I really liked the HOP where there is no gravity. I know it’s been done by others, but not as well. The objects are hidden in plain sight, and are not especially distorted. The interactions are not complex but there is many in each scene. I didn’t need hint at all for them – which is an achievement in the CE game, so I get a little extra thrill there. *cheeky grin*

The puzzles also have their achievements in the CE that are not here in the SE game. Which to my mind adds incentive to persist longer, and therefore get greater satisfaction when we win. There are a lot of puzzles and mini-games and a lot of them I found quite challenging (not that that means much – I usually do). There are quite a few really neat twists on more ordinary puzzles.

For the record, there are also collectibles in the CE game. I didn’t particularly like them because they look pasted in, and I  think they were.

The game has an interactive jump map and directional hint. So what little adventuring is required is easy enough.

So, why the CE? Mostly it’s about the achievements, and the added excitement they can bring to a game. And because I think this game could use a bit more spice. Throw in some gorgeous wallpapers, an extra chapter and the built in strategy guide (for those puzzles I couldn’t get on my own), and I think you have a game worth the extra $$$.

If you’re tight, though, this is still a pleasant but not earth shattering game.

Thanks so much, JustTheFacts! I've been pondering this since the CE came out.
You've just made my decision easier!!!

You're most welcome! Let me know how you like it - it'll be forever until I can buy this one.
Sponsored content