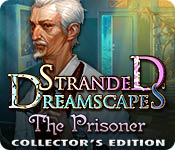 Every passing day disengages little Emmy away from reality! Guide Helen Wheeler as she takes a risky journey inside the mind of her niece to get to the bottom of the problem. But be cautious! Childhood memories and wondrous fantasies are not the only things you will find here: the Dreamscape is corrupted. And you are not welcome.

Re: Stranded Dreamscapes 1: The Prisoner

Bit Of An “Also Ran”

The intro to this game is VERY impressive. The diffident telling of the story of a fear-ridden girl who finally drifts down into catatonia is so sad and engaging. This is not an unknown story by any means, we have seen it many times before. But I can’t enough of stories centred around dreams and nightmares, and the curing of them. In this one, it is our niece who needs help in fighting her many phobias, which have driven her totally away from the world.

People not into bugs might want to skip this game, if the demo is a good example of what’s to come. So far the phobias have been of dogs and spiders, storms and being alone. Judging by the map, the demo covers about 1/3 of the game.

The graphics are okay in this game, a bit grainy and a little too cartoony. Well enough drawn, but not always well lit. One thing I always like is the way scenes change from their nightmare form to a happy comfortable dream, which is done here reasonably well, but again not impressively so.  I also liked the holographic doctor. There is a aspect ratio toggle in the Options menu – a really great feature, it lets many more people with different systems to enjoy the graphics.

The sounds are well done, but the music is irritating in just a short while. The voiceover in the intro is awesome, but that bear is going to drive me nuts. The background noises are very good and add a great deal to the atmosphere.

I would say the game is not difficult, if weren’t for the mini-games. There are 18 puzzles, most easy to moderate, but some I just had to skip. There are  13 HOPs (interactive list) visited twice. You also get an interactive jump map, and directional hint, but no journal. Plus that annoying bear helps out far more often than I liked, and usually I don’t mind that kind of thing. We are also in frequent contact with the professor on the outside monitoring the girl’s vital signs. He acts like a kind of cheer squad. “You’ve done it! She is improving!”

A decent fun game, but nothing I saw in the CE demo suggested this was of a CE standard, and replaying it now, I feel the same. I will probably buy the SE, but it is not at the top of my list.