Comes when you call?  You are a very lucky Mummy for her to do that already - or at all!

My hubby decided that Siri needed a bath because "If I'm going to have someone snuggling up to my neck at night besides you, I want to be sure they're clean!"

Oh, I felt sooo bad!  She mewled so piteously, and she tried to get away, but she didn't claw me at all.  And then...  I got my hand too close to her face, and you know what she did?

I was doing something that scared and upset her, and she kissed me!

I can't tell you what a joy this cat is.  She is completely non-aggressive -- she's not bitten or scratched at all, not even when playing! -- and incredibly sweet.  At the same time, she is full of personality.  We couldn't be happier

This little darling sounds like a match made in heaven for your family! Some cats are just born to heal and bring joy.

I am so happy you have such a beautiful addition to your life.

This makes me so happy! For you and for the kitty.

This is so funny.

What a great narrator's voice, too

I've probably taken 80 picures of Siri (thinking of re-spelling that to "Ceri"), as well as multiple videos, but I can't find the cord to transfer them from the camera to the computer!

She is such a little sweetheart.  She was on my lap today, and I was petting her and said, "I just love you, you are such a darling child."  She responded by trilling in her kitten-like voice, raising up her head, and giving me a gentle kiss, right on the lips.

We decided that we needed a companion for Ceri (I changed the spelling from 'Siri'), so I told my husband that he got to choose our next cat.  He saw a Craigslist ad for some kittens, and reallllly wanted a calico, so I went to look at one today.

She was the "runt" of the litter, and abandoned along with the mother and sibling(s?).  She was so weak when they rescued her that they didn't think she'd make it!  We don't know how old she is.  Her rescuer thinks maybe 8 weeks, but I'm thinking no more than 6.

This is our new kitty, who has tentatively been named Jinx (EDIT: Final name = Callie): 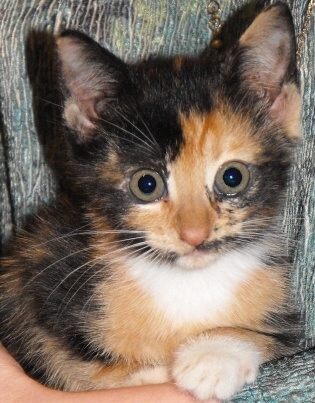 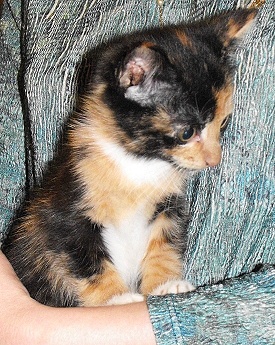 That profile suits you!

She's a cutie - tough too by the sounds of it!

You're just like me. I got one little kitten, and after a few days, I decided she needed some company, so got her brother as well.

Good luck to your new baby

When I got home, I found that my hubby and eldest had decided on the name 'Callie' for her. She has a few fleas, and by the watermelon-round belly, I'm guessing she has worms, too. *sigh* Such is life for the pet-owner ;) For now Callie is in "quarantine" until we can get these things remedied.
_________________
Never be a prisoner of your past.
It was just a lesson, not a life sentence.

genkicoll wrote:We decided that we needed a companion for Ceri (I changed the spelling from 'Siri'), so I told my husband that he got to choose our next cat.  He saw a Craigslist ad for some kittens, and reallllly wanted a calico, so I went to look at one today.

She was the "runt" of the litter, and abandoned along with the mother and sibling(s?).  She was so weak when they rescued her that they didn't think she'd make it!  We don't know how old she is.  Her rescuer thinks maybe 8 weeks, but I'm thinking no more than 6.

This is our new kitty, who has tentatively been named Jinx (or Jinxy?): 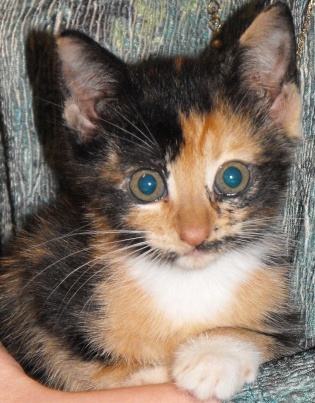 you have a real little beauty ...

CONGRATULATIONS on your new additions  ..

She is so beautiful!!
Sable

How adorable Callie is, genki.  Now I'll have to fight with all my will power not to add another kitten to the menagerie, lol.  Good luck with her, she looks like a real sweetie!
Frodo

Oh Genki... Callie is so adorable!  Just look at that cute little face!

Thanks for showing her to us.

Justie (or anyone else who can help), how do I go about making the kitties comfortable with each other?  Callie is absolutely fine, but Ceri is scared of the kitten :(
_________________
Never be a prisoner of your past.
It was just a lesson, not a life sentence.

Well, I really don't know that I qualify, seeing I had to resort to Feliway to settle my lot down.

But normally it is only a minor hiccup.

The specialists say, keep them separated and introduce them to each other slowly, by controlled (you are there to hold them) contact until they are used the each other.

That lasts with me about an hour

My method has worked for me in 90% of introductions in multi-cat households, and it is just about the direct opposite. Certainly, you should be in the room with them when they are meeting for the first few times.

I usually let the old cats get used to the new kid by having them in the room with the kitten in its cage/carrier. They mostly get over the growls and hissing fits after a surprisingly short while.

Then it is best to let the kitten out and see how she goes with the first cat. Usually, the new one is not scared, just curious. The one who has had you to herself may not be too keen on her, but, as you say, can find the kitten a bit overwhelming. She'll get used to it in its own way and time.

Contrary to the experts again, I always feed new cats with the older cats, side by side. A bit of growling is inevitable at this stage, but it seems to encourage the more timid to get over it before she starves to death - she won't. Likewise, it helps if they have separate but not too separated litter trays.

When a cat has accepted that it is stuck with this new critter, she usually makes the best of it, trying on a little bullying and one-up-manship.

And remember, although kittens mostly sleep, when they're awake, they bug EVERYBODY with their endless hi jinx.

Oh, it's good too, if the early introductions are in a room where there's nowhere one can go to hide from your reach, or corner itself leaving the other free to harrass.

Hope all that helps. In any case, don't worry, they will work out their own relationship in their style, whatever works for them.
genkicoll


She's been treated with a manufacturer-provided (yay!) dose of Resolution for her fleas, worms, and ear mites (yes, she has them), and she has a grade 1 heart murmur, which may actually resolve by itself.

I'll have to give her a de-worming medication as a follow up in 10 days.

Something really important that I didn't know is that you never use your hands as toys until they're at LEAST 6 months old, as it teaches them that hands are something to bite.  REALLY good to know, especially since she really likes to bite (gently, but still!)
_________________
Never be a prisoner of your past.
It was just a lesson, not a life sentence.

Callie is a little cutie-pie, Genki!

Justie, wonderful advise! I'll have to tell my sister. She has a new female kitten and her daughter recently moved back in with her much older male cat.
The kitten wants to play, he ignores her and will hiss at her.

I guess I was lucky when I had my 2 cats. They were "brothers" and always got along. Well, except for the occasional fighting and running crazily through the house after one another.

Thanks for the info, Genki. On the "hands as toys" thing. I did not know that either!
JustTheFacts

Oh, genki, I meant to say, my Bobo had a heart murmur all his 14.5 years of his life. Never affected him in any way. He was the most robust of all my first litter of kittens, and survived many things many other cats would die from!
Sable

Another good thing to know, genki, is to avoid the temptation of moving your toes under the bed clothes when they're young, as they'll think that's also a toy for them to play with.  Once they fasten onto a thought that something like that is fun, they'll continue it forever.  I learned the hard way, lol.
Esme

Oh goodness, genki! Those are some adorable fur babies! So happy you get to have kitties in your life in your new home. 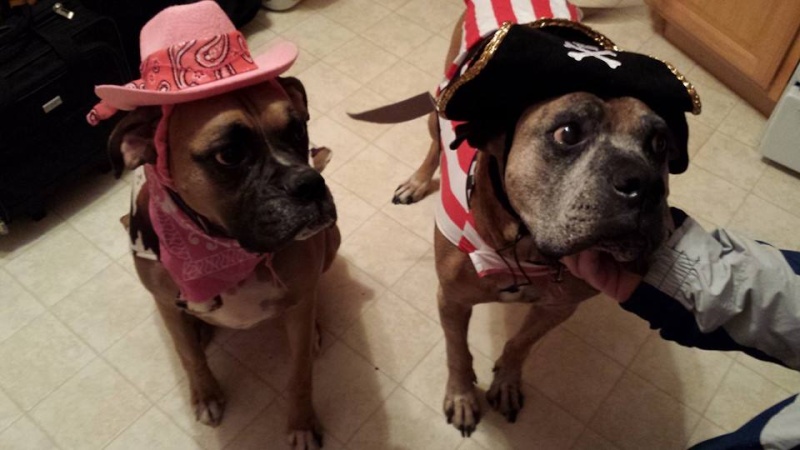 Here are my two from this Halloween. I have no shame.
genkicoll

Did they get some "candy", Esme?

They got sweet potato chewies... does that count?

And because I have no shame... here they are five minutes ago. 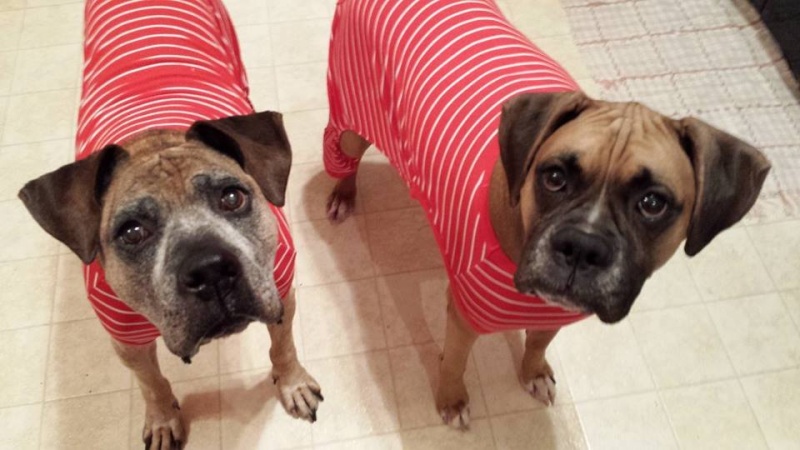 Oh my gosh, look at them in their matching PJ's!