I have not had a pet in my home for many years now, but I enjoy them vicariously through family members.

My sis took in a sweet, orange kitty that had been abused by local children.  He was starving, had been beaten, then thrown up on the roof of a family friend.  She just had to bring him home.

Having been a stray, he would eat anything he could, whenever he could get it, and of course became overweight.  Is it any wonder that they named him Garfield?

When I met him, he was a real sweetheart, but I noticed a lump on his left side while I was petting him.  He ended up going in for a hernia surgery, which had been caused by the kids who'd abused him.  What no one knew is that Garfield had been beaten so badly that he'd broken three ribs, and had been living with pneumonia the entire time sis had had him.  Even the vet didn't know until Garfield started having breathing problems after his surgery :(

After rounds and rounds of antibiotics, water pills, and massive struggles on his part, Garfield lost his life a couple of weeks ago.  Sadly, his abuse goes unpunished, as we don't know who the kids are. 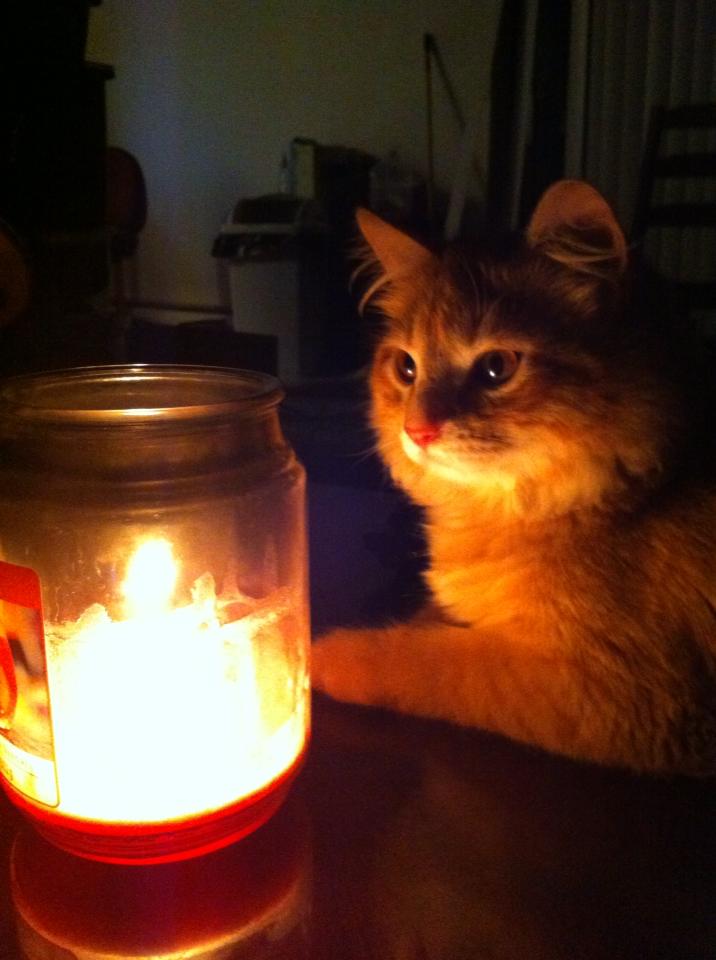 There IS an upside to this story!

Yesterday, sis's son went out in the country to an old farmhouse to adopt a new kitten, also orange.  Tigger is bright, inquisitive, and loving -- just what the family needed.  Very cute, too! 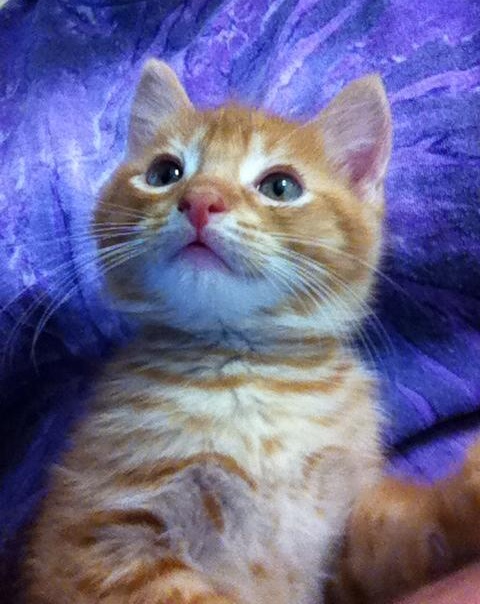 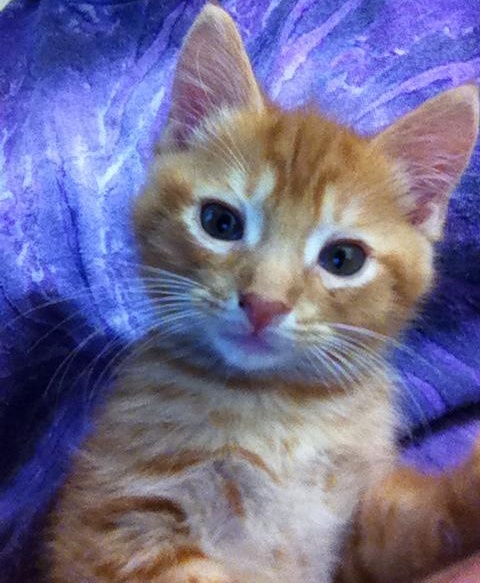 Such a sad story that didn't need to end the way it did. It makes you wonder just what kind of parents these kids have.

Good for your sister, Genki. She's a fantastic woman for taking in all the unwanted/abused kittens who have no home.

I am a firm believer in spaying/neutering your pets (unless you're going to breed them). There are far too many dogs & cats who've never been shown an ounce of love and discarded like trash.
It really pisses me off!
RenaissanceMom

What sweet faces these kitty angels have! Poor Garfield - he was so beautiful, with such a gentle face. So heartbreaking to know he'd been abused. How cruel and vicious people can be!!!

Felix is a handsome fellow, and I know will be an enchanting and well-loved friend!

I have had a gazillion pets through the years, and my current family includes three cats: Charlie (short for Charlemagne of course; he's our reigning emperor, lol) our 11yo beautiful, loving (but definitely strange, lol) black cat who we think is more dog than cat; Tybalt (the Shakespearean 'king of cats'), a noble and very loving 10yo Snowshoe lap cat; and Max (~5yo, we think?) a Tuxedo street rescue with LOTS of personality who is our dog's best friend. And then there's the baby of the family - Lucy, our 2yo little 40lb black Lab/hound mix who is everyone's sweetheart. All were rescues with their own stories, but none were ever abused. Tybalt's story is sweet - when my daughter was 12 and had the role of Juliet in a local children's theater production of Romeo & Juliet, they would rehearse at a little church and one day a little 5 or 6yo girl was crying on the church steps holding this sweet and beautiful little Snowshoe kitten. Her father wouldn't let her keep this tiny baby and she was told to leave him at the church to find a good home -- enter US, lol. You can see why he was named after that R&J character. 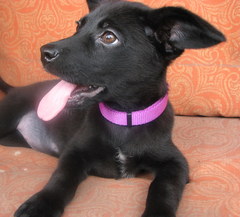 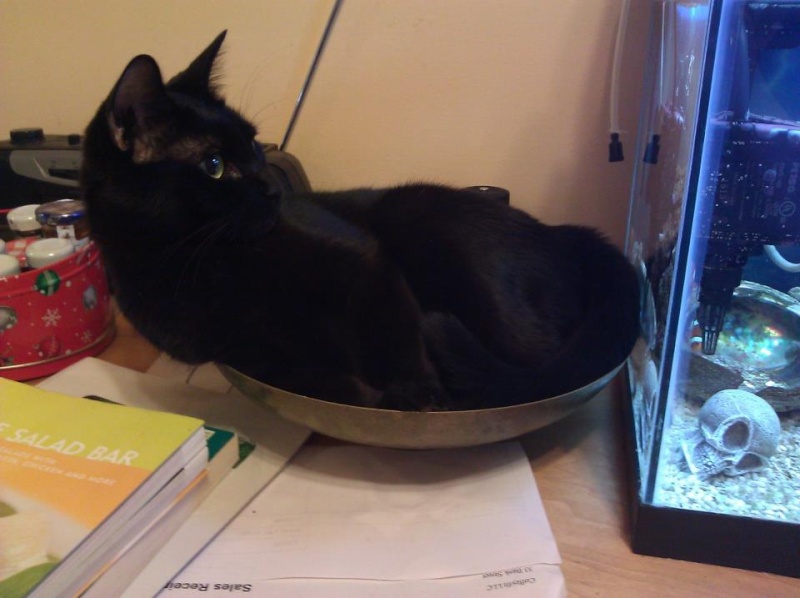 Charlie in the fruit bowl

ETA - My avatar is of my two heaven-dwelling best friends: Jackie and Sasha.

Aw, Garfield's story brought tears to my eyes, genki.  I've never understood how people could hurt animals and always wish they could be repaid in kind.  Not nice of me, but still.

Felix is a beautiful kitty, hope he has a long and happy life with your family.

I have two myself, both starting out as strays, but ending up the King and Queen of our castle, lol.  I'd post pictures, but it's way too early to try to engage the brain.  I'm more the crack of noon type.

When I can get my head screwed on right, I'll try to post some pics of Jesse and Felicia.
genkicoll

If it helps you can find the (hopefully) easy instructions on how to load and post images HERE.
_________________
Never be a prisoner of your past.
It was just a lesson, not a life sentence.

This is Mr. Bubba... king of the castle. 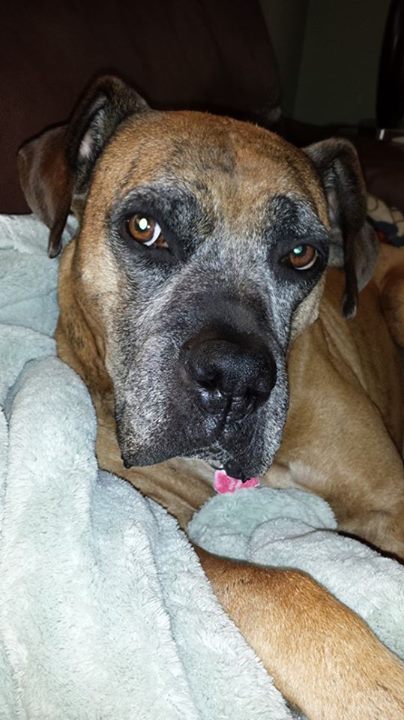 This is Penny... the Queen who really runs the place 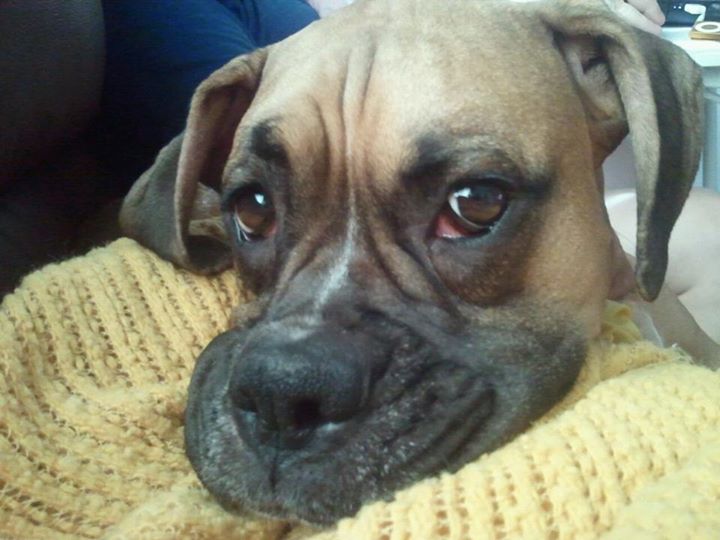 Both are rescue dogs who really rescued us!

Aww, look at those faces

genkicoll wrote:If it helps you can find the (hopefully) easy instructions on how to load and post images HERE.

Thanks, Genki!
I edited my post above to include photos.

Thanks!
I love Esme's dogs too - what sweet faces!!
RenaissanceMom

Oh, and I had to go back and edit sis' new kitty's name... I don't know why I thought it was Felix... His name is Tigger!

RenaissanceMom wrote:Thanks!
I love Esme's dogs too - what sweet faces!!

Those faces are how they get what they want... all the time! LOL 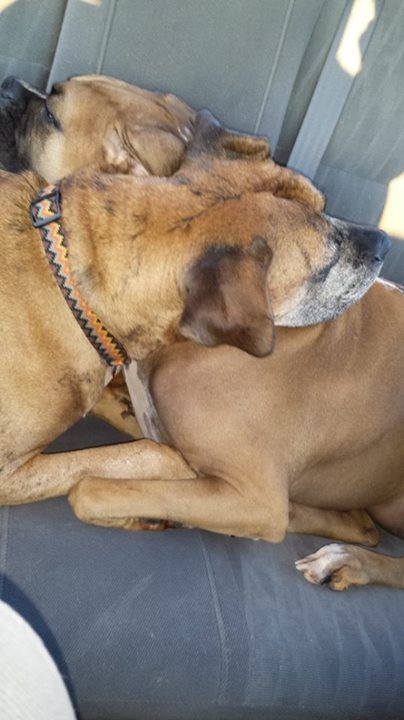 Here they are riding in the car and being impossibly cute.
Esme

Rmom, Tybalt is the Purrrfect name for a kitty!  They are all so cute!  I love photo of Charlie in the fruit bowl!

Oh my gosh, I love them all!!! They are so adorable.

I'll have to post a pic of my furbaby, as soon as I read the instructions on how to do that.
RenaissanceMom

Yes we've always had 2 dogs at a time, along with our pusscats. Everyone's great friends!

This year, since the passing of our beloved Sasha, on the right in avatar pic, we are down to one dog... but Lucy's got such a personality she is dog enough for us, lol.

I'm looking for current photos of her but can't seem to find them on the computer. Maybe I'll just take another one today.
RenaissanceMom

Okay, Lucy as of 5 minutes ago: 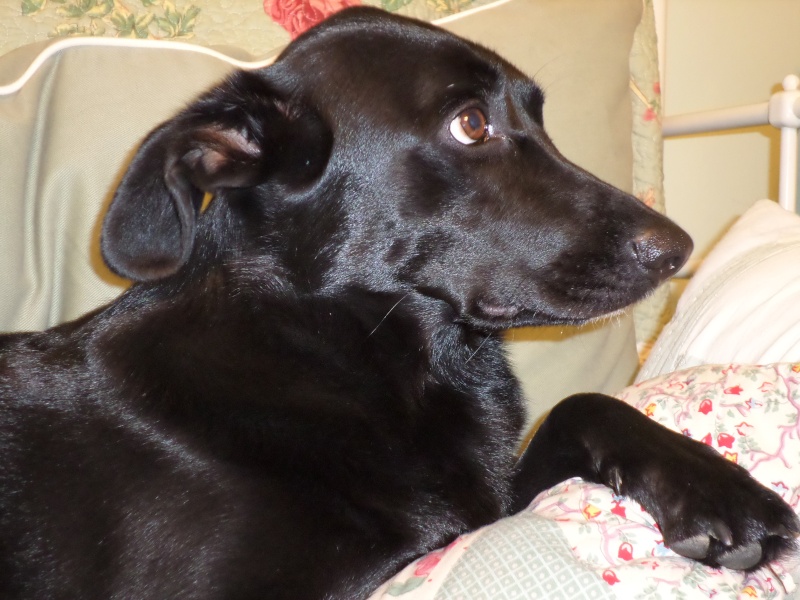 Aw, Esme, they are so cute!

Aww you can tell Lucy has a big personality... just look at those eyes!  What a cutiepie!
RenaissanceMom

Ha ha, I showed up with a camera and she had that worried 'guilty' expression - I guess she thought she must be in trouble. Aww, not THIS time Lucy.

Esme, I love the photo of your babies 'hugging'.

It makes me really miss having two dogs again.
Sable

What great pictures and lovely animals you've all posted here.  What a sweet story about Tybalt.

And I had to giggle at Tigger's name change, I do think Tigger's more appropriate, and way cuter.

How beautifully shiny Lucy's coat is, and yes, one would wonder what she's done to have that look.  Maybe she's just camera shy.

Esme, both your dogs are outstanding, but I can't help but

Penny's picture, where her mouth is all poochy.  So sweet!

I haven't had any success yet in posting my pics, some synapse in my brain seems to keep misfiring, even after reading the instructions.  Will try later, I swear.
Sable 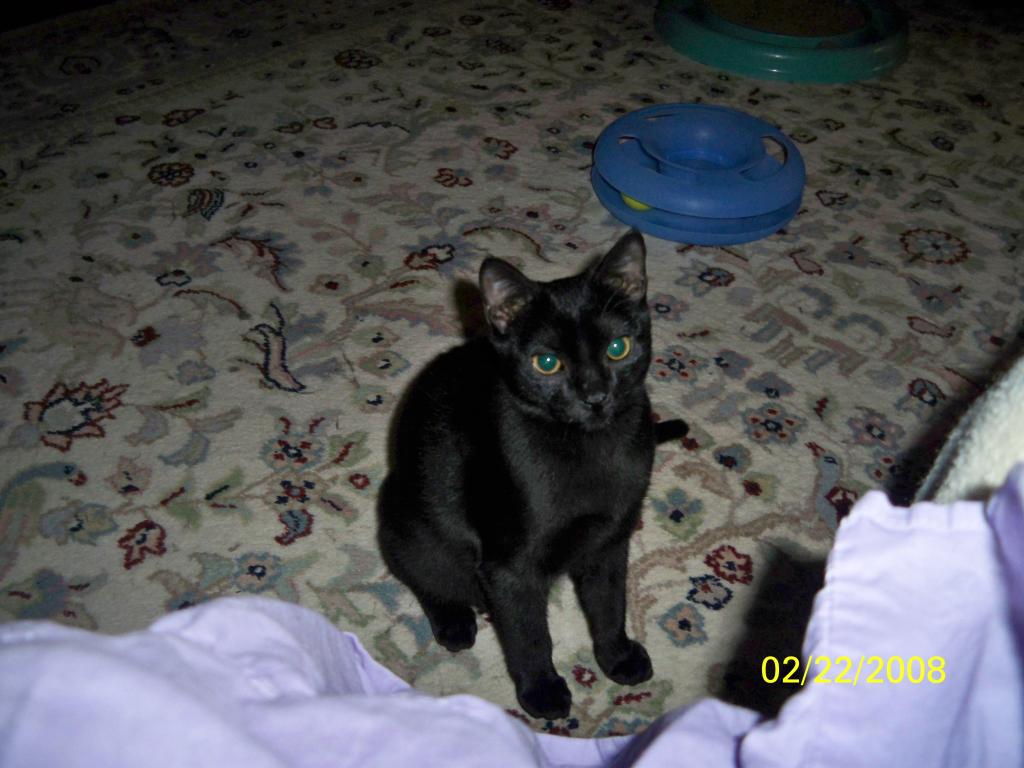 Eureka, finally got to load pics.  The one above is Jesse, King of the castle, 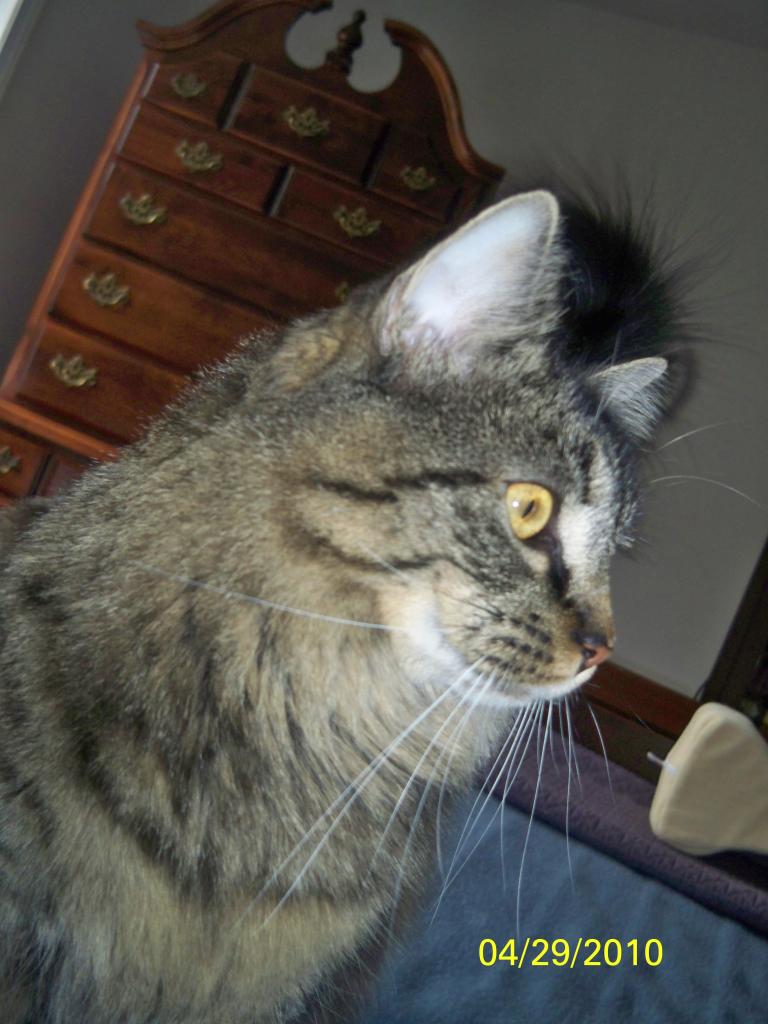 The pictures are probably too large, but will have to fix that at another time.  So much learning at once is too difficult, lol.
genkicoll

What in the world was Felicia looking at so intently?

Does she really have a tuft of black hair on the top of her head, or am I seeing something else?

Gorgeous pics, Sable! Jesse and Charlie could be twins, and it *does* look like Felicia's sporting a black wig - or something! - lol.
Sable

Lol, genki and RM, I looked more closely, and, come to discover, that's the very tip of Felicia's tail, which somehow I managed to catch mid-wave.

Have no memory of what Felicia's looking at, but she mostly looks that way; she's a very intense cat, lol.
Sponsored content