Available at:
Big Fish for PC and MAC
iWin 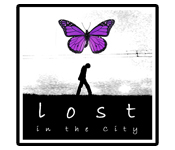 After the first date with a charming girl named April, our
hero wakes up alone in an unknown abandoned city after being drugged. He
is trapped and believes this somehow involves April. Explore the city
while trying to investigate how April is involved. Help the hero survive
in an atmosphere of drama and suspense. Are you Lost in the City?

Review by Cordia, Nov. 8, 2010 wrote:
Lost in the City was developed by the rather elusive Elephant Games studio. I say “elusive” because their website has not been updated since early 2009, and Gamezebo has the developer of this game listed as Big Fish Studios (they were the publisher) and likewise, they have Merscom listed as the developer for their more recent release, Masquerade Mysteries: The Case of the Copycat Curator.  The development team a Elephant Games also gave us Bloom and Lost in the City: Post Scriptum.

Lost in the City is an Interactive Hidden Object game, and it was my first purchase in the genre.  I love this game, but I am also aware of its flaws.  It is heavily story driven and originated as an online Room Escape game , if I recall correctly.  I have looked for another game that I like as much and only found some recently.  This is not a game for everyone, but it seems to really resonate with those who do like it.

The production values, at least on the graphics, seem quite low.  The graphics are just not incredibly clear, and even if they were top notch graphics, they have a grittiness to them that would likely be unappealing to some casual gamers.  For me, they were a great backdrop to the hauntingly bleak story.  I will say this for the graphics, though: The objects are all completely identifiable as what they are, and remain consistent in appearance throughout.  This game also features a magnifying glass upon right clicking, which can prove to be very  useful.  I really enjoyed the music, but have heard from others that it was too repetitive. There is no voice acting, but I prefer that if the other choice is bad voice acting- and a lot of the voice-overs out there are really awful.

The story is deeply fleshed out, more so than any other of this genre that I have played.  The characters are well developed and feel like they could be real people.  One character’s name changes halfway through the story, and I am not really satisfied with the reason given for that.  Still, the game has an exceptional number of levels to play through, as the story contains 48 chapters.  The chapters usually consist of multiple scenes with puzzles to figure out in order to reach the next screen.  I was fascinated with the entire story and completely drawn in by the end of my trial period.

The game can be played with a timer or without, but I was swayed to play the timed mode because it promised more money from the various mini-games.  The money, I discovered much later, is used in a very intriguing manner.  The game has various extras- concept art, excerpts of the story that had to be cut from the game, even a couple of the mini-games to replay- and all of them are considered “secrets” that can be purchased via the money earned in game.  This made for a clever motivator.

The game play is not all that taxing, but the biggest upside to it for me was that all the object searches are related to the story, and everything I found went toward progressing the story.  Some of the puzzles were beyond me, and they really overused the lock picking puzzle by the end of it, but there are skip buttons on each of them.  There is a small time penalty for three wrong clicks in a row, so I learned to be really careful with clicking.  I don’t know what happens in untimed, however.  Also, for as sparse and bleak some of the scenes appear, the objects to find are incredibly well hidden.   These are not junk piles at all. If anything, they are the opposite of junk piles.

Too Long; Did Not Read:  I love this game. I even like the sub-par graphics and the repetitive but suitably atmospheric music.  This game is heavy on the atmosphere and has a very intriguing story to go with it.  It can be played in timed or untimed mode.  There is a time penalty for three wrong clicks in a row, in timed mode.  The puzzles can be skipped, and there are some that get repetitive.  Responses to this game seem to be very polarized.

If you’ve played or trialed Lost in the City, what did you think of it?  If not, did this review effect your interest in the game?

I really enjoyed this series, especially the first game. The storyline was probably the strangest I had encountered in any game. Topping the storyline, and what amazed me, was that scenes seemed to have so little in them and yet I had a hard time finding the objects! I will never forget how hard it was to just solve the first HOG in the game. How could a nearly empty room be so difficult? I loved it!

It is not a "pretty" game and the story is frightening (at least to me) but the mystery was very intriguing and the whole game was well crafted IMO. I have not played it in a long time so the details mostly escape me but the memory of the strangeness and the challenges of near empty locations still give me a shiver and a thrill. This was also the first HOG that I had played which included a Magnifier - great touch and this feature is still rare today.
JustTheFacts

From Mastodon To Elephant Circus

Evolution in its starkest form can be seen in the monumental changes we witness everyday in the world of electronics. So. Imagine a hot thick demitasse of scalding Turkish coffee – bitter, potent, dangerous, exotic. Now imagine a chilled , heavily sweetened mocha frappe – light, frothy, refreshing. Even so, you will be unprepared for the stellar distances between the Elephant Games of today and this 2009 offering.

As you’d expect, this game suffers badly from the antique graphics. They are grainy, fuzzy, ugly. In my least favourite artistic style (I call it 20th Century Dumpster). Worse still, the hidden objects, and there are 100s of them, are often tiny. And yet still, I really enjoyed this game. In fact, I am delighted by it.

It’s secret is that the game does not fit any HOPA mould. It is a very different experience. It is more like reading an animated, interactive graphic novel (comic book) – or possibly a riddle book. Which you occasionally get to contribute to.

The story is different, well told, with the complexities, plot twists and gradual enlightenment of a true novel. The novel is interrupted by the gameplay, not the other way around. Nevertheless, there is a lot to do in every scene, but you are given precise instructions all the time. Every action is controlled.

After the first few ‘tutorial’ chapters, you follow a fairly straightforward formula. Read one page of the story, (memorizing what hints you can for later in the chapter) which is illustrated by sketches. This will activate a scene – later on you will learn how to use the map, which requires you to figure out where you should go next. A variety of tasks will be given to you, and usually include some of multiple objects, a list, a bunch of silhouettes, a couple of easy puzzles, maybe a riddle or two. Often you get no more than a vague clue as to what to do next.

There are a large number of pictorial puzzles, and a number of the line up the rings type. Everything you collect has a purpose and will be used inside that room. At the finish of each chapter, you will find the map that allows you to travel to your next destination. If that sounds a lot, I’ve got another surprise, there are 34 chapters!

Luckily, there is a relaxed, untimed mode as well as the timed one. Both modes accumulate (or subtract) points by your actions.

The very best success this game has is the edgy atmosphere, helped along by grungy art and freaky music. It brings to mind games like F.A.C.E.S. or Nocturnal: Boston Nightfall.

Perhaps the solution to the conundrum of how Elephant Games ever came to be the developer of such a different game from their well known glamorous style today, lies in the credits – Elephant Games South Studios.