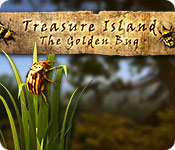 The year is 1827 when William Legrand, the son of a wealthy family from New Orleans, lost everything. Ashamed, he leaves and creates a home on Sullivan's Island near Charleston, South Carolina. Here he lives simply and peacefully, until one day when he discovers a golden beetle on the beach which will set him on a journey in search of Captain Kidd's hidden treasure! Guide William on the adventure of a lifetime in Treasure Island: The Golden Bug!

It isn't the best game out there, no.  But, it isn't the worst either!  I am going to get it with a PCC.  I happen to like the graphics style.  It's nice for a change to have the hidden objects within the entire page, not a pop-up HOS.  Some of the items were actually tricky to find.  You find stars for extra hints.  The "games" are simple, some too simple, but still I had an enjoyable hour demoing it!  And enjoyable is the reason to play a game!  It doesn't deserve all the one star reviews at all.  Old fashioned, yes.  Bad?  No really.

They tried to bring some options.  You can turn scrolling off or on. Sometimes you do need to look to the left or right though to find items. You can zoom in areas of interest to look for objects too.

At least it's a bit different.  I often like these small programmer/developer games!  I even liked Vampire Secrets: Eternal Love for it's detailed graphics!  The developer even PMed me that they were based on actual items, rooms, tapestries etc.
JustTheFacts

FIRST IMPRESSIONS
My first reaction was, “Oh no! Another HdO Adventure!”. If you’ve come across them before (love or hate), you’ll recognise this one instantly. Now, I’m one of those who hate this style of HO puzzle adventures, but I think I can give you a fair assessment. It has a lot of unique features, some of which you’ll only see in this series of games.

From the first you are aware that this is a minimum budget game; no VO, no whistles and bells, little spent on visuals. There is not really an introduction, you are thrown immediately into a tutorial of the game. The graphics are not the worst I’ve seen, but they do look old and cheap.

SIGHTS & SOUNDS
Graphics do not support widescreen, so the distortion is pretty bad, and the graphics aren’t spectacular to begin with. The scenes are scrollable, and you also have zoom, both of which give the game a 3D feel, looking around corners, so to speak, because some items will be hidden from view by the ‘background’ from certain angles, it’s an interesting twist. Sounds (ambient) are actually quite good.

WHAT’S HAPPENING
You are an impoverished beachcomber who comes across an entirely new species of beetle – the golden bug. Through a series of investigations, you discover that it holds the key to the famous pirate booty, Captain Kidd’s treasure. So now what are we going to do about it?

MAKING PROGRESS
This is a HO and puzzle game, the game determines your every move through the adventure tasks. For instance, you cannot leave a scene if it is unfinished, and an arrow button will appear when it is over, taking you to the next location.

The HO puzzles are all different sorts. The static list, which gives you only 3-4 items at a time to find, and scrolls each time you find something. Multiples, matching pairs and many other variations on the theme constitute most of the puzzles. Hidden objects are often tiny, so the zoom feature is necessary quite a bit. The cursor is also very finicky about picking up items, in HO scenes and out, and you really have to take care trying to use inventory items. Some items are misnamed.

There are a few mini-games/puzzles thrown in. Some are a bit repetitive. Nothing too difficult, which is just as well. There is NO SKIP and no instructions with the mini-games, you must use a hint to find out what to do.

Collecting stars gain you extra hints, as do the puzzles.

FAMOUS LAST WORDS
For those of you who like this sort of game, 20 000 Leagues Under The Sea: Captain Nemo & Around The World In 80 Days: The Challenge are identical in format, but a little rougher in the graphics. This game is, I think, the best of the bunch though.

For fans, and for exotica collectors, there may be something in this that appeals. As an everyday sort of game, though, at best it might be good for a punchcard coupon. Not even that for me, and I really can’t recommend it.