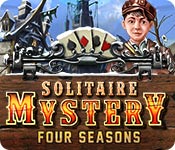 Time has stopped in the City of Magic Cards. This curse is the eery punishment, imposed by the wise Nature for greed and avidity of the city inhabitants. Now it is always Autumn in the rainy neighbourhood of Spades. Clubs are frozen by the never ending Winter. Hearts have stopped, waiting in vain for the flowers to blossom with endless Spring, and Diamonds pine away under the scalding Summer sun. You are the only one who can save the magic land! Try tons of different solitaire layouts, solve dozens of unique puzzles and make the Magic City clock work again!

I just played the demo, and it was fantastic!  The boards are varied, so I don't get bored of one-up-one-down solitaire, and the HOS are very tricky.  In one you put things in, but you have to think about, not what they are, but how they are used, or what they are made from or of.

I will eagerly await an email announcing it's sale!  If there are two things I can count on from Playrix, they are 1) a sale and 2) a great game!

I have yet to have a poorly made game from Playrix.  Games I don't care for, a few, but they were still well done.

Awesome!  I had a feeling this was going to be a good one, so I'm definitely looking forward to Playrix's inevitable sale

By the way, I just realized that this is part of a series!  Links to the first game added towards the top of the first post

Fun, But Where’d The Story Go?

This is an interesting mix of genres, having several HOPs and other puzzles (so far, they have been easy, spin the tile and sliders), as well as two styles of solitaire. It was certainly very appealing to me when I saw it as one of the top games of 2013, and I’m surprised that I had somehow missed it. It doesn’t live quite up to expectations though.

I loved the idea of “SOLPA”, solitaire puzzle adventure, but that implies a story to hold all the action together. Unfortunately, we don’t seem to get much of that. We are thrown straight into a solitaire game the second we press play. The notebook records almost nothing, and really, what else can it do? We receive very little input about the game other than instructions if required. We move about from one place to another on the map, with no warning, explanation or reason.

The gameplay itself is quite addictive. The two types of solitaire (standard match-one-up-down, plus one where we must find pairs) are fun and varied enough by the large number of layouts offered. In some ways the game is pretty basic. There are no fancy powerups or other gimmicks normally found in these sorts of games, no points, no achievements. Just the special locked and unlocking cards. But I found this much more soothing to play, and easy to lose myself in.

The HOPs also come in two types – word list, and “place the related item”. There have been a couple of slider games, one very easy, the next one not so much. Also one quite nifty spin the tile game.

I guess I should mention that the graphics are clear and the backgrounds interesting. It opens in widescreen, but looks a lot better without the adjustment, even though that means black bars. The card backs are not much, and there is no option to swap them. But the game looks nice. Sounds good too, with cheerful melodies that, at times, could have been a little quieter. Still, there are options.

Apart from the confusion caused by not knowing what the story was, this is an excellent game, an old fashioned solitaire game, mixed with various puzzles to provide a 'richer gaming experience'. *grin*

Interesting!  I'd hoped for some story to hold everything together, but at least it's addictive!
_________________
Never be a prisoner of your past.
It was just a lesson, not a life sentence.