Echoes of the Past 5: The Kingdom of Despair

Echoes of the Past 5: The Kingdom of Despair

Echoes of the Past: The Kingdom of Despair
by Orneon - August, 2013 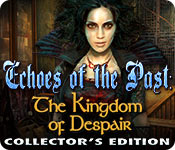 End the witch's evil reign at last! Explore the twists and turns of a mysterious world as you travel through a strange, cursed kingdom, where the characters have been robbed of their beauty and talents by a cruel sorceress. Tests your wits as you gather the missing amulets, restore the lives of the cursed characters – and open the portal to return home!

I already demoed this one, and I enjoyed it a lot more than the last one. It is on my to buy list when it comes out as a SE. The last one felt, to me, stale. This one just seems a bit fresher,
and I rather enjoy the evil witches attitude, knowing I will beat her.

Best Of The Bunch

FIRST IMPRESSIONS
5th in this series, this game is both representative of it, and something new. We still have our nemesis the witch, and we still must fix things she has destroyed before we can travel back to our reality. Something I didn’t notice immediately – this game is not a time travelling one. The “past” is merely the kingdom we are stranded in, which is not Orion, but the witch’s home world.

SIGHTS & SOUNDS
Graphics are superb, they have those sharp edges I’m none too keen on, but even that became unnoticeable quickly, because otherwise, the art was beautiful. Cut scenes are exceptional, and I love the witch’s new look. The voiceovers are very good, done without any attempt at lip sync, the characters’ mouths don’t move. Some of the most majestic and uplifting music I’ve heard was mixed with the original theme, which I’m tired of, but I guess is a way of connecting this to the earlier games.

WHAT’S HAPPENING
We are, once again, sucked through a portal to another world, this time the witch’s. She has scattered the 5 amulets we need to get back, throughout the realm, so we must go on 5 quests to redeem her poor subjects in order to get them. She has removed each victim’s greatest virtue, turning them into opposites of their real selves. It is very well done and told, with each part of the world being quite different, but connected by the one theme.

MAKING PROGRESS
Loads and loads of puzzles. Some of them are really clever adaptations of old ones, some completely new, all of them engrossing, and none too easy. I had to skip a few. There are also a fair number of HOs – multiples of, interactive lists, and misplaced items. I particularly like that the items to replace are actually items you picked up earlier from a previous scene. The multiple items are handled differently as well.

Skip and hint are quick. Hint gives you advice, or sometimes shows where you should be. The interactive jump map allows you to toggle (on or off) indicators of active areas and completed scenes. One of my favourite things about these games – the inventory is at the top.

BLING!
Well, the CE does have achievements and a ‘spell book’, which is a little bit of fluff at the end of the game. And of course SG and bonus chapter and some puzzle replays. The only gallery items are concept art. The main game ends satisfyingly, and the bonus game is wedged in seamlessly at the end. Another quest, but unnecessary to the feeling of completion.

FAMOUS LAST WORDS
Always of two minds about this series, I can finally say I love this one! For me, the SE would have been just as wonderful. So finally, I can give a game in this series an unequivocal five stars.

Either way, I’m glad I bought it.