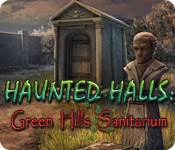 Explore a decrepit mental asylum and find your missing boyfriend in Haunted Halls – Green Hills Sanitarium! After hearing about some wrong doings at the asylum, your boyfriend, Tim, takes off to conduct an investigation of his own. As Tim dives deeper and deeper into the mystery, his letters to you abruptly stop coming. Set off to the Haunted Halls and find him in this incredible Hidden Object Puzzle Adventure game!

Options include a music and volume slider, full-screen and custom cursor.

There is a SKIPPABLE interactive tutorial, and the cut-scenes are skippable, as well.

The gameplay itself is a mixture of IHOG and adventure. During the hidden object scenes, the lists are found in four "boxes" in your task bar. Finish one box (find all the objects on that list), and the box disappears. Kind of nice, for it allows you to see more of the scene.

HINTS are refillable, and fill relatively quickly. The hints will work during the adventure portion of the game, so if you're stuck, you have an "out". Good thing since I'm a bit under-rested and missed some things *giggle*

The mini-games are not easy, but there is a SKIP button, should you need it.

The story is mostly conveyed through the "Notes" on your (ingame) laptop. The font is bright green and very appropriate for the mood they're trying to convey. You do not have to access the notes (hence, the story) to progress through the game, but they will give you mini-hints as to what you're supposed to be doing, and the "Notes" screen in your task bar flashes at you until click on it

Green Hills Sanitarium has an eerie, psychological story, interesting gameplay, environmental (though somewhat repetitive) music - a very enjoyable game! Purchased before my demo was even over. Definite thumbs up from me!

I recently upgraded to the CE version of the game, and was a bit disappointed by the extra content. I got to the end much faster than I had anticipated I would, and accidentally clicked at just the wrong moment and missed the final cut-scene!

It’s quite an exciting car smash we get ourselves into in the intro to this game. It’s been done before, yes, and since, but it is still well done. The voiceover is deep, authoritative, ominous.

Our foolish boyfriend has got himself in too deep investigating strange happenings at an abandoned asylum. After your dramatic arrival, you soon find a lot that’s strange yourself. It seems some mad doctor is experimenting with patients with phobias, although his methods don’t seem likely to help them any. You must help these poor people in order to find and rescue Tim, the boyfriend. There are some really interesting phobias in this one, and some bizarre treatments.

Despite its age (released 2010), this game still looks good, the hand drawn graphics (yes, it’s an ERS game) look sombre but not overly dark or disgusting. It opens in wide screen without distortion, which impressed me. The music is different from the norm with ERS, and the environmental sounds are chilling.

There are a lot of HO scenes, and very few puzzles in this game. The HO scenes are clear, not too dark, and rarely are the objects small. There is animation, but no interactive items in the standard list. I like the way the list is broken up into segments, and the buzzing fluorescent lights. Adds ambiance *smile*. A not very helpful hint works outside the HO scenes.

BLING!
We have with us an electronic (I think) notebook to record information, including the medical records we find along the way. No map though.

This is the first of the Haunted Halls series, and is very well put together. It is interesting how well a game can work, even without the ‘”Bling!”. I found the game as immersive and enjoyable as any of the blockbuster games that are the norm today.
genkicoll

Options are simply sliders for music and volume, full-screen and custom cursor.  The game automatically stretched to fit the screen, and it looked just fine at 1920x1080.  There is no choice of difficulty, so you're stuck with sparkles, whether you want them or not.

Your journalist boyfriend has gone missing during an assignment, but the police have offered no help.  Head out to the mental hospital he was investigating to learn the truth, but be wary... This is no ordinary asylum!

The story is mostly conveyed through the "Notes" on your in-game laptop.  There you will find two sections: Entries, which are our character's thoughts, and will sometimes contain mini-hints, and Medical Charts, which give you extra background on the patients at the Sanitarium.

Your laptop font is bright green and very appropriate for the mood they're trying to convey. You do not have to access the notes area to progress through the game, but they really help to flesh out the story... and the "Notes" screen in your task bar flashes at you until click on it.

Except for the game's intro, there are no voiceovers, and really no cutscenes, either.  The story progresses through the notes and charts you find, and by talking (briefly) to people that you encounter.

The graphics are not pretty, but they capture the creepy, environmental feeling beautifully.

The game has a nice adventure vibe to it, despite frequent hidden object scenes.  The HOS - each of which are played twice - are indicated by red sparkles, while green sparkles show you where the puzzles are to be found.

During the hidden object scenes, the lists are found in four "boxes" in your task bar. Finish one box (find all the objects on that list), and the box disappears. Kind of nice, for it allows you to see more of the scene.

HINTS are refillable, and fill relatively quickly. Using a hint during the adventure portion of the game will either highlight an area, or tell you "There is nothing to do here." (No directional hints)

The SKIPPABLE mini-games usually took a while to complete, but I thought they were fun, so only skipped a couple of them.

Only the Strategy Guide is accessible until you complete the bonus chapter.

The extra chapter takes place just minutes after the main game ends, and is the true ending of the game.  It only takes about an hour complete, and repeats one of the HOS from the main game.  Missing this part isn't going to make or break the beginning of the story for the second installment of the series, but it does answer a question you might have had during the main game.

Green Hills Sanitarium has an eerie, psychological story, interesting gameplay, environmental music and atmospheric graphics.  I enjoyed revisiting the game, and recommend it to IHOG-lovers.
_________________
Never be a prisoner of your past.
It was just a lesson, not a life sentence.