Available at: Big Fish for PC 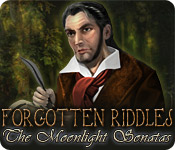 Francis von Amadeus was a child prodigy and talented composer.
The city of Godesberg has given you access to his journal filled with
secrets and riddles. Use the clues to detect hidden objects within the
many chambers of the Moonlight Opera House. You`ll notice a gaunt,
ghostly figure still graces the second floor balcony. Between treble
clefs and Forgotten Riddles, can you solve the mystery behind the
Moonlight Sonatas?

Re: Forgotten Riddles 2: The Moonlight Sonatas

Options include separate sliders for sound, music and ambiance. There is a full-screen/windowed option.

The first thing I did was turn down the sound effects, as they were interrupting the lovely piano music!

You can tell that this game is made by the same people who did Enlightenus, as the gameplay is different than your usual HOG. Instead of a list of words, you are given musical notes. When you select a note, you are given a riddle to solve. For instance, the first riddle reads, "I dwell in a closet when dressed in a shirt; when stored on me clothes will stay free of wrinkles and dirt". You must have the riddle selected to pick up the item! If you are looking at a different riddle, you won't be able to pick up the hanger. <--(Spoiler, highlight to read)

Most of the HOG scenes will be done via riddle, but some are interactive scenes done like those in Enlightenus - You have objects which you must place appropriately in the scene. For instance, you have an arrow, and must figure out where it goes. There might be a quiver or bow empty of arrow for you to find. Mouse-over items in the scene, and it will show what the item on the scene is. It might say "empty quiver", so that would be a good place to try the arrow. Sometimes you can't place objects until other items are placed, as adding items to the scene often cause a reaction.

You have five HINTS (at least on the first series of rooms) and a generous 45 minutes on the timer (as mentioned, the timer IS optional).

The game is relaxing and non-urgent, despite a rather spooky plot. This is a game you could easily come back to after month, and not be confused.