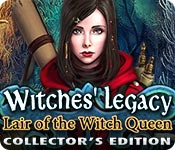 A few years have passed since you rescued Lynn from Elizabeth, the witch who murdered her family, and now Lynn has grown into a young woman with awakened magical powers. When she receives a letter from Germany about Elizabeth, Lynn opens a portal to chase after her. Her thirst for revenge has enraged her, and an evil force is using that to pull Lynn deep into the darkness. You must find your young ward and stop her before the Witch Queen's evil plan comes to pass in Witches' Legacy: Lair of the Witch Queen, a cunning Hidden-Object Puzzle Adventure game.

Re: Witches' Legacy 2: Lair of the Witch Queen

FIRST IMPRESSIONS
At first, I was put off by the different artistic style of the graphics, but after a while I began to really enjoy it. This game is a direct sequel, and the intro does a very good job of filling in the back story without going on too much. You don’t need to have played the first game, but it does give more meaning to this one. From the start it is clear that this is going to be a high quality game.

SIGHTS & SOUNDS
The graphics are a (little unusual) style of “hand drawn in oils” and are top quality, although I did suffer distortion because the game wasn’t geared for wide screen, which seems a strange omission in such an otherwise exceedingly well produced game. The voiceovers are excellent. And I also found the ambient sounds appropriate and fitting the scenes. Music, unobtrusive.

WHAT’S HAPPENING
Since we rescued our niece (?) from the witch Elizabeth (who was engaged to Lynn’s brother Tom) in the first game of this series, she has grown into a beautiful but troubled teenager, unaware of the extent of her magical power. She has not let go of her hatred for the witch who stole her entire family from her. When she hears from a woman in Germany in connection with Tom, she becomes determined to go there. This story is unusual only in that our ‘family member in need of rescuing’ actively resists saving. Story ends well.

MAKING PROGRESS
We have an even balance of HO scenes (interactive lists) and puzzles, many of the puzzles new twists on old with a few original ones as well. I had to skip a couple purely because my patience was wearing thin, but I don’t think any of them are too hard. Nor would I call them too easy, though. You did need to put in a bit of effort. The interactive jump map is a big help as the game progresses, because the variety of the locations makes it hard to remember where you ‘need that widget’. Hint and skip are pretty quick, depending on what game mode you choose. There’s also a journal.

BLING!
Our imp. He’s cute but not saccharine, and has an individual personality all his own. He is also ever eager to help in the adventure. There’s a game timer as well. Instead of playing HO scenes, you can opt to play a pair matching memory game. Seeing each HO scene was revisited, I did one of each, which was kinda cool.

FAMOUS LAST WORDS
I enjoyed this game more than I expected to, once the graphics started appealing to me. The story is good, even if done many times before, and I loved having voiceovers that were both professionally done and easy on the ear.