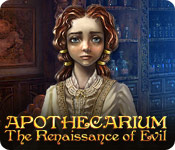 During the Middle Ages a terrifying, mysterious disease raged across Italy. It killed thousands of people, and whole towns and villages perished together, swallowed whole by this ravaging and perilous plague. Everywhere the disease touched, death followed, and the masses were consumed in hoards. There were legends of a mythical town where the secret to defeating the disease was hidden—a town by the name of Apothecarium, built by Italy's foremost scientists. The brightest minds in the country came here to conduct research and collaborate with other scientists—engineers, mathematicians, artists, sculptors, writers, and even alchemists. Survivors thrived here until a mysterious discovery fell into the wrong hands, and now it’s up to you to free the survivors from the clutches of an insane and cold-blooded lunatic!

This one is a very complicated little game and you’ll need your wits about you to get anywhere with it. It is not going to be to everyone’s taste, but it definitely has appeal. And there is no other game out there like it. (To my knowledge)

The STORY revolves around a plague-ridden medieval Europe suffering the ravages of an UNKNOWN DISEASE. There are rumours of a town where SURVIVING SCIENTISTS have gathered to FIND A CURE. You set off for this place, but are stopped by a STRANGE PERSON in a very ODD HELMET, and end up overturning the carriage outside the gates.

The GRAPHICS are REASONABLE, PLEASANT & CLEAR, though sometimes a bit too DARK. The MUSIC is VERY EXCITING & SUSPENSEFUL and therefore becomes a BOTHER even for me.

It is the GAMEPLAY that will tie you up in knots. There is SO MUCH to KEEP IN MIND!

It is PRIMARILY a HO GAME, with HOS being of the INTERACTIVE LIST variety. BUT they are so much MORE! Some of the ITEMS are MORPHING OBJECTS! Sometimes the HO scene is the general LOCATION, other times it is an IDENTIFIED AREA (bubble sparkles) within the location.

If you want you can CHOOSE to play a MATCH 3 game instead of the HOs, but it is a tricky game, and I found I spent less time finding the objects than erasing them.

There is roughly an equal number of HOS to PUZZLES, although halfway through the trial I still have not encountered a PUZZLE yet.

The HOS are TIMED, and depending on your time, you receive GOLD COINS. There are also TALISMANS scattered throughout the LOCATIONS, to be collected and used to get gold coins. These COINS can be used in the STORE to BUY POWER UPS, for example, FASTER SKIP. Once you have played them PUZZLES, HOS & CHESTS are unlocked, and you can replay them to improve your time and EARN MORE COINS.

CHESTS can be opened by a SIMPLE PUZZLE, and contain a SURPRISE. You can save these until you want to use them, without knowing what’s inside. For instance, I clicked on mine in an HOS, and an item was identified and removed from the list.

There are also ACHIEVEMENTS, which can be found in the TROPHY ROOM, accessed through the NOTES (or main menu). The INTERACTIVE JUMP MAP & TASK LIST can also be found there.

All up, I’d have to say that this game has a lot going for it, in terms of UNUSUAL & VARIED GAMEPLAY, but I found all the EXTRAS a bit much. I DID think putting morphing objects in the HO LISTS a really EXCITING idea.