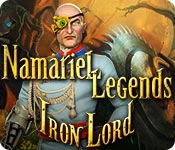 Upon the prosperous nation of Namariel descended the terrible Iron Lord. And with the help of a legion of mechanical soldiers, he conquered it very quickly. Be the one to face the dark ruler and destroy the source of the Iron Lord’s power. Exciting adventures, the true courage and mysterious world await!

Thank you! I am so eager to try this game! I loved Shaman's Dreamscapes. I am not such a fan of "steam punk" but this game looks good.

Last edited by twinsoniclab on Thu May 16, 2013 10:24 pm; edited 1 time in total (Reason for editing : adding what happened after I demoed a game)
luvtoread

Just downloading the demo now.
I do like steam punk type games.

Wonder what about it twins did not like?
Guest

The game was slow to respond for me. Glitchy cursor. Then, just the entire thing didn't interest me. Bunches of stuff to do, but it felt like busy work. My monitor isn't that big, but when the uncle has his close-ups it seemed fuzzy. Mostly, I just wasn't willing to deal with the slow responses. I think they tried to use the Beholders as robots, but it just didn't work for me.

Not the quality that we got from them with Dreamscapes: The Sandman.

If I want to play with little robots, I'll play Machinarium. Which I only heard about here! Thanks! It's so cute.
genkicoll

That is: NO HO SCENES & NO PUZZLING PUZZLES EITHER

I am not usually into these mechanical steam punk sort of games, but this one isn’t like any of that type that I’ve seen. It is as much FAIRY TALE as it is ROBOT INVASION.

There is a VERRRRY LONG intro that gives us the backstory, but it’s EXCITING and ATTRACTIVE and has wonderful MARCHING MUSIC to set the OMINOUS scene.

The kingdom of Namariel is invaded by robots led by the evil Iron Lord. We see the palace destroyed, the king humiliated, the queen fleeing. Heart rending stuff. Turns out, though, that this is all a show on your uncle’s mechanical music box. Or is it?

Your uncle is an INVENTOR and it is to him the king turns to for help. We are to go on a quest to seek out NOSTRAMUS, the seer who foretold the catastrophe. We never get to leave even, before the Iron Lord’s minions capture us and throw us into prison. Now we must ESCAPE and RESCUE our uncle, and make the JOURNEY to Nostramus.

We’ll have HELP along the way. We have a gadget which allows us to READ MINDS, a cute little ROBOT assistant to go where we can’t, and a strange SQUIRREL-LIKE critter who follows us around and is quite useful.

There is a lot of CUT-SCENES in this one, enough to really bug some people, but I found them fun. They are FLAWLESSLY DRAWN and the VOICEOVERS are EXCELLENT. Lips are out of sync, though.

All the ARTWORK is HIGH QUALITY and IMAGINATIVE.

The few PUZZLES so far have been VERY EASY, while the ADVENTURE ITSELF a bit more DIFFICULT for me. This was at least in part because I couldn’t COMPREHEND the mechanics.

But HINT is DIRECTIONAL, so I made do with that. NO MAP. I never even thought to look for SKIP. I don't think the game has one.

I like this game. I think it will appeal to those who usually like steam/mechanical games, but has a WIDER APPEAL, including those who enjoy a good FANTASY game with just a dash of *cute* as well.