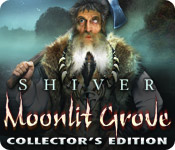 You owe everything to Rene Malot, the man who found you as a child and raised you as his own. So when he goes missing, you're elected by the district to take his place, following in his footsteps as a doctor. On the way to your new job, a wolf attacks your carriage, forcing you to flee for shelter in a nearby village. Something here is very wrong, but the villagers aren’t talking. As you discover their secrets, you might discover something about the foster father whom you've loved so dearly.  You'll need all of your wits to survive the long night in Shiver: Moonlit Grove, a chilling Hidden Object Puzzle Adventure game.

The STORY is not new. You are rescued as a baby by your foster father, a doctor, and you follow in his footsteps. It is obvious from the start that you and WOLVES have some connection, but just what is unclear. The rest you must find out for yourself.

It is a bit of a departure from the earlier Shiver games, in that it is set in horse and buggy days. But that oppressive creepy feeling is the same.

The VISUALS, including more than one lengthy (replayable) videos, are SENSATIONAL, but then everything about this game is.

If there was MUSIC, I missed it, OVERWHELMED by the AMBIENT sounds of a really terrifying storm. I jumped more than once.

But it is the GAMEPLAY that has me chafing at the bit to get this game, and it is complex.

First, HO GAMES – and they are games, not scenes. Each involves INTERACTIVE items that take SEVERAL STEPS to get. And those steps will keep you guessing. I found myself chuckling in surprise at the eccentric uses to which items were put.

There were two HOGs in the first two chapters. Judging by the replayable content, there are 11 HOGs in all.

Early on you get a LAMP – but you have to work for it, it’s not just lying there waiting for you – which you get to keep for the duration. Which means, there are also HOGs with poor lighting where you must search a small spot at a time. Knew there was a catch, didn’t you?

There were PUZZLES everywhere. Some were nice, EASY, straightforward, others totally defeated me, and were CONSIDERABLY HARDER.

As well as these, certain objects in your INVENTORY are PUZZLE ITEMS. These are some of the more simple puzzles, or are items that require further information, such as a code, to use them.

There is a lot in your inventory in general, and some of those items have some pretty odd uses too, plus it is also very easy to miss something due to the storm, the dark lighting, and the atmosphere which makes you want to rush.

There is a JOURNAL with notes and tasks, but NO MAP.

I took almost exactly 1 hour to finish the demo on Casual (3 DIFFICULTY LEVELS), which covered the first two chapters. At a guess I’d say, maybe 6 more, but don’t quote me.

Bonus Chapter, Artwork, Strategy Guide, Replayable Videos (and some of them are so good you will want to replay them), and Replayable HOGs.

I don’t know, for myself, if that’s enough for a CE, but it’ll kill me to wait for the SE!