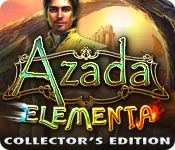 Journey to amazing worlds as the whimsical saga continues in Azada: Elementa! After its precious elements are stolen, Azada chooses you to find the elemental mages who can save this special world. But bad-guy Panoptes is waiting around every corner to stop you at any cost – or is he? Nothing in Azada is as it seems…

During this trip to Azada, you’ll also get your very own cuddly sidekick. Earn critter coins you can use to dress him in a variety of fun outfits!

BASED ON OH-SO-LABORIOUSLY COMPLETED GAME

Everyone and their sidekick has reviewed this one, but I’m putting in my two cents’ worth anyway.

I would have recognized this as an ERS game within seconds. One look and you know. And three bars of the music as well. I do think I caught one track that didn’t sound like either Azada or ERS. But I would have recognised it as an Azada game in my sleep. Why are these games so darned hard? I love the idea, so I keep buying them, but they are way beyond my abilities!

The story, I think, is this game’s weak spot. While it remains the appealing lost-in-book tale of all the Azada games, it seemed a bit strained in this one, and no feeling whatsoever of being in a book rather than the many alternate worlds faced in other games. I believe a fifth in this series would be hard pressed to sound credible.

If, as the arguments say, this is Azada-for-dummies, because we have HOs now, then pass me the dunce’s hat. I found even the HOs to be some of the hardest I’ve played! I was overwhelmed too, by the sheer volume and creativity of the many puzzles and mini-games. Such colour, variety, imagination! Wow!

In the battle between the pre or post ERS, I weigh strongly in favour of ERS. This is the most beautiful and imaginative endeavour from them yet, and was way better than the earlier Azada in visuals. As a fan, I’m also proud to see ERS finally break out of the mould and introduce features like the interactive jump map and all those unusual extras in the Bonus Content. I’m still trying to work what to do with the Azada in Colour, but the Azada Dwellers volume was an excellent idea!

Now, ERS, to get my unreserved Hero award for most adventurous developer, I just need you to lose the female voice actor you’ve been using shamelessly in every game I can think of. She was never to my liking to begin with, but now I cringe whenever there’s dialogue.

I’d forgotten to mention that I managed without using the SG, when lo and behold, started the Bonus Content and immediately needed the SG! However, the bonus content is actually a little easier on the whole, of reasonable length, and holds well together. It flows well from the main game, without being at all necessary to it. In fact, I really enjoyed.

We’ve mentioned all those extras, so I won’t repeat myself.  They’re all fun.
And now, for the first time in FOUR Azada games, I can finally say: