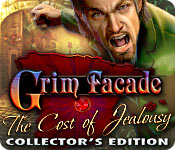 Unravel a puzzling whodunit in Grim Façade: The Cost of Jealousy! You have been called to Spain to investigate the murder of a grieving woman’s husband. But what looks like a simple case soon becomes an elaborate mystery filled with twists and intrigue. You must use your skills to get a step ahead of the murderer before you become their next victim. But uncovering their identity won’t be easy in this tale of deceit, betrayal, and disguise. Everyone is a suspect in this exciting Hidden Object thriller!

Re: Grim Facade 3: Cost of Jealousy

The Grim Facade series has had some of the best locales we’ve seen, in first Venice and then the Italian wine region, and now Spain. The beauty of their scenery is a large part of their appeal. Which is why I was so pleased to see a aspect ratio toggle on this instalment, and drapes not black bars on either side of my monitor.

This is just the first of many (all positive) changes made by the developers in this game.

The music is an outstanding success in creating a feeling for Spain. The visuals back it up, even the wonderful fans that are collectibles (for added hints) are different, again letting us know it’s not ‘same ole same ole’, that a new atmosphere is taking over.

Then there’s our new assistant, our growing reputation as a ‘near psychic’ detective, and a really cute little sidekick who helps us out when he’s around.

All this is new and delightful and available in both versions of the game. In fact, the main game itself is identical.

It’s gorgeous, relaxing, fairly easy, with a higher than average HO content – in 3 different styles, standard interactive list, multiple units of a single item, and the newer more interaction-dependent silhouettes. I love this variety in HOPA games, and am glad to see it more often.

The puzzles were for the most part easy, and at no time was I sorry I didn’t have the integrated strategy guide of the CE.

The CE has some interesting bonuses I didn’t have access to on the demo, but include:

*Integrated SG (not needed for most)
*Bonus Game – the ending for the main game was conclusive as far as I could see, although a little abrupt. Others have commented the bonus game is too short.
*Unlockable mini-games and HOS
*Grim Trivia game for trophies.

I’m happy with my choice of a SE version of this game, but wouldn’t have minded catching the CE!