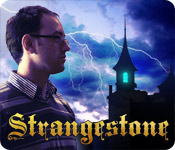 While researching your family archives, you discover that you’ve inherited a mansion! Now you and your brother are meeting your real estate agent there for an appraisal. However, something’s not right about this old house. Soon you will discover that inheritance never comes easy in this thrilling hidden-object puzzle adventure game! Can you survive the night and uncover your ancestor’s secret?

No formal review on this one, just a few comments.

As far as I can tell, this is the first game from these developers, so I went in with an open mind. The graphics felt a bit... "close"-- rather claustrophobic, somehow. I can't really explain what I mean better than that

Still, the gameplay was pretty good, and despite the "closeness" of the graphics, they are still well-done. I continued playing until... a pet peeve of mine came into play (literally!)

What pet peeve, you ask? The devs expecting us to do actions that make NO logical sense whatsoever... things that literally defy physics and common sense! This may be a perfectly lovely game, but I simply cannot play it. Twice I have played through games that had this kind of nonsense, but it was purely because I had already purchased the games (Urband Legends: The Maze and Nightmare on the Pacific), and both times I was scowling and griping at the computer the whole time >_<