The Keepers 2: The Order's Last Secret

The Keepers 2: The Order's Last Secret

The Keepers: The Order's Last Secret
by Blam! Games - February, 2013 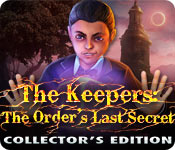 The Order of the Keepers has been like your second family, ever since you discovered it tied to your own past. But when you’re summoned to Spain to investigate a dead archaeologist, you’re swept into a confrontation with ancient evil forces that have been waiting five-hundred years for revenge. Explore the colorful streets of Seville, Spain, gathering clues that span across the eras of history. Who killed Pedro Alvarez?  What’s inside the box he unearthed? Uncover the truth in The Keepers: The Order’s Last Secret, an exciting Hidden-Object Puzzle Adventure game.

Options include separate sliders for volume and music, plus custom cursor, full-screen, and the ability to change difficulty at any time during gameplay.

There are three modes to choose from:  Casual, Advanced, and Hardcore.  I chose Advanced mode for the no-sparkles and hints/skips if I need them!  Just a note that there are no sparkles for HOS, either, but there's always a task to complete in order to activate them, so it's easy enough to figure out that you should be looking at those times.

The tutorial is optional.

The game automatically adjusted for my wide-screen, and looked EXCELLENT, like it was made to be stretched.

The HOS are lightly interactive, and there is a rapid-misclick penalty.

I LOVED the first game, Lost Progeny, so I sprung for the CE of this one without trialing.  I was hoping for more of the same gritty, dark feeling that was so pervasive in the first game.  Sadly, what I got was one of those games that rubbed me the wrong way from the very beginning.  Part of the problem is that MOST of the scenes are cluttered... almost as cluttered as the HOS!!

There is also my pet peeve of all of the scenes having the same color palette -- red overtones everywhere!  Not a big deal, but as I was already irritated, it certainly didn't help!

Truth be told, I might have lasted an hour before I gave up.

I honestly thought I was over gushing about the graphics, but here I am again. Wow! This game just looks so professional, you are already convinced before you get past the intro. But it’s not all about the graphics, or even mostly, because this game is top calibre stuff all the way.

We’ve met these people before, these Keepers, of which we are one; and the evil Vlad has crossed our path. But this time the world really will end if we don’t stop him. He’s after the infamous Pandora’s Box, and in his hands, that means havoc and destruction for at least 500 years. There’s much of interest and an interesting interpretation on history in the story, and you’ll need to be attentive in order to understand some of the actions required. You have a good journal for that and a jump map of different design from the norm.

In the beginning there is a lot of cutscenes and dialogue (very well done, but not in sync), as the backstory is laid out for us. Soon enough, we’re on our own though. The game starts out quite easy – I was quite surprised at the simplicity of the puzzles, having played the other Keepers game (not essential to this story, but a great game) - but the surprise was short lived. It soon became the more complex and intriguing game I expected.

I enjoyed the HOS, which were interactive and often required more than one action before receiving an object. The graphics on some were not as good as they should have been, but they were interesting and challenging. The puzzles, some new some old, some unique to the Keepers series, ranged in difficulty, getting harder as they went.
There are Achievements (all easy to get), and morphing objects to collect. Like the puzzles, the morphing objects start out very easy to see, but as the game progressed, become more tricky.

You can’t beat a game like this. Interesting, challenging and best of all, fun.

Briefly, the bonus game was as good as the main game, relevant to but necessary for the main story, and with new locations and puzzles. The standards are all there – wallpapers etc. Achievements and morphing objects are exclusive to the CE, as are the extra mini-games, and of course the Strategy Guide. I particularly appreciate these last two, because I am looking forward to understanding and winning some of those trickier mini-games before I play this again!