Maestro 3: Music from the Void

Maestro 3: Music from the Void

Maestro: Music from the Void
by ERS Game Studios - January, 2013 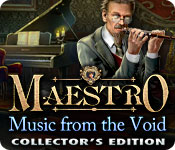 The Maestro’s back in this exciting encore to Notes of Life!  Eerie music fills the air in Vienna, where shadows terrorize people in the streets. Two musical prodigies have gone missing. Can you save them without striking a single false note?

FIRST IMPRESSIONS
The third game in the Maestro series is a step up and then some from its predecessors. Almost every aspect of the game has been revamped, though not so much as would lose the feel of the previous games. In fact, in more ways than one, this game is like a combination of both earlier games.

SIGHTS & SOUNDS
The intro cut scenes are better than previous, at least in terms of graphics and drama. There is more definition and detail to the art and it is much brighter and more colourful than before. The music is still the same, enough to really get to me after a while. It is monotonous. Another addition is a narrator voiceover. I am of two minds about it. The voice is good, and the recap of the story so far is okay, but there’s something irritating with the delivery. Luckily, that is a one-off event and the other brief voiceovers are well done.

WHAT’S HAPPENING
That brat from the last game, the ‘young maestro’, has returned for an encore performance, stealing two of the most talented young players in Vienna, and it is up to you again to find and rescue them. But as he has grown (he looks about 10 years older now), so have his ambitions. Now he is in possession of not only the Music of Death and the Notes of Life, but the even more dangerous Music of Immortality. And he plans to use it to acquire enormous power to himself.

MAKING PROGRESS
Plenty of HOPs. They are quite interactive when a list is given, and there are also progressive silhouettes HOPs. All of them are visited twice. There are many more puzzles this time around and they are more imaginative than the earlier ones. The hint is finally directional, but there is still no map.

There is a violin that you use from time to time, along with the music sheets for the magical music, to directly engage the ghosts and shadows that threaten Vienna. A couple of features have been added that I wholeheartedly applaud. There is a widescreen option with side panels that make it look like the game is on a music stand – very cool. And the inventory bar now locks. Once again, there are difficulty options.

Pleasant treat: this game has replayable HOPs (8) and mini-games (16).

FINAL VERDICT
Really like this game. It looks and plays more like a modern game with this last in the series. But it remains a fairly simple game, that is not too difficult and does not require major tracking of plot twists and obscure connections. It is still a sleepy dreamy kind of thing, great for that day when you’ve just finished an extravaganza and need a break.

Maestro 3: Music from the Void (IHOG)

Options include separate sliders for Music, SFX and Voices, plus Full-screen, Widescreen and Custom Cursor. Choice of three difficulties, which can be changed at any time.

You've been brought in to investigate an attack at Vienna's most prestigious musical academy, and the subsequent disappearance of two musical prodigies.  Eerie music fills the air, and otherworldly specters terrorize the city's people.

Our Journal contains extra story, and summarizes long news articles, notes and diary entries (you know, for people who don't want to read a wall of text.)

A character that we know from the previous game makes an appearance.  It will be helpful to have at least played Notes of Life before starting this one, but I personally recommend playing them in the order they were released. ;)

Be on the lookout for collectible musical instruments as you play. 19 are found in the main game, and the final 6 are in the bonus chapter.

There is no MAP, nor any form of fast transport, but active areas are kept to a minimum to reduce backtracking.  HINTS used during the adventure portion of the game will either indicate a hotspot or give you a directional arrow... or pinpoint a collectible musical instrument, if you've not yet collected one on the scene.

In this game music is both our enemy and our strength.  Our fearless detective is not only an investigator, but a sometimes-musician, as well.  We will use The Void's own weapon against it by playing musical scores that we find on our violin.  When the violin in your inventory glows, you can play musical "spells" to interact with the environment.

There is a timed "battle" late in the game, but the timer is generous, and it never felt like I was in any danger of running out of time.

Most of the Hidden Object Scenes are find-by-list with light interaction needed for items listed in orange.  There are also a few highly-interactive find-by-silhouette scenes, which I'd have liked to see more of!

HOS do repeat but items that you found there previously stay gone from the scene when you go back.

The extra chapter overlaps the ending of the main game just a bit, so I consider this the true ending of the story.  The gameplay is of the same quality, with to-find lists only for the HOS.

This is a big change from the first two games in the series, with more adventuring and less focus on finding objects.  It also didn't feel creepy in the slightest, which I definitely missed.  Still, the gameplay is solid, and if you enjoyed the first two games, you'll likely enjoy this one as well.
_________________
Never be a prisoner of your past.
It was just a lesson, not a life sentence.