Motor Town: Soul of the Machine

Motor Town: Soul of the Machine 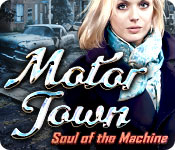 Explore the eerie depths of Motor Town in search of an inventor who plans to create cars with souls! With the fate of many souls and the life of the inventor on the line, you must not delay!

A young journalist, desperate for a big story, accepts an intriguing assignment: Hunt down an eccentric inventor who hasn't spoken to anyone in years and interview him about his latest gadget. The writer gets more than she bargained for when she arrives at her destination and finds the living have abandoned the town and left the spirits of the dead to roam its streets. As she begins her investigation, she learns of the inventor's plans to create cars with souls, and of the rich entrepreneur who funded his research but might have had secretly evil motives.

With a shadowy figure that looks like black smoke leading her on, the journalist explores the eerie depths of Motor Town in search of the full story. As her guide, you'll search vintage cars and rundown factories for clues, perform tasks for ghosts, and solve an array of ingenious puzzles. With the fate of many souls and the life of the inventor on the line, you must not delay!

This looks good. Hope it makes it to BF soon.
genkicoll

Yes, it really does! Alawar makes some great games, and I've only been able to find one other game by Wellore (a match-3), but the screens are gorgeous, so I have high hopes

I agree, it looks good. A lot of times it costs more at Alawar than BFG so will wait.
Sportygal2009

FIRST IMPRESSIONS
Despite being a relatively new game, this one looks and feels like a much older game. The quality is there, it is just the style that seems older. And the story is freaky! Cars with souls? That’s really out there.

SIGHTS & SOUNDS
The art is pseudo-realism, which is part of that ‘old’ feeling.  Sometimes the quality could be better, but in the HOP scenes the graphics are clear, colourful and well drawn. Although the scenes are grungy and very junk-piled, the items are clearly visible. The various ghosts look great.

Voiceovers are, mostly, awful. They sound like someone reading a script (yeah, I know they are, but we’re not supposed to notice!). Except for the assistant, who is really excellent. The music is light but suspenseful. The jukebox in the diner seriously impressed me with its “bobby sox” number.

WHAT’S HAPPENING?
You are a journalist sent to get an interview with a reclusive inventor who believes he can make cars with souls. You got to admit, full marks for originality! The trouble is, the financial backer just isn’t working out, the disagreements between the reclusive scientist and the ruthless entrepreneur have led to unforeseen catastrophes, and the living have deserted the town. You need to get to the professor, stop the investor, and save the souls of those trapped in town. The ghost of Dr Camping’s assistant offers to help you, and gives you a strange box for storing amulets.

GAMEPLAY
What you’d expect from a standalone standard edition some time ago.  Mainly HOPs, all of which are interactive word lists, visited twice each. The HOP lists don’t show all the items at once. There are not so many puzzles. The adventure components mostly follow common sense, a lot of the mechanical, find the missing bits and repair the engine kind.

Items do not stay in inventory long, and it is emptied at the end of each chapter. The hint is directional, a bit slower than most. The journal records codes etc. There is no map, despite the promising document you get early on. The black bar comments tend to be overly helpful, and there are only 2 modes of difficulty. I found the cursor to be annoyingly sensitive in both HOPs are close ups.

COMBINED IMPACT
An old-fashioned game. Nothing overly noteworthy but pleasant enough if you fancy a change.