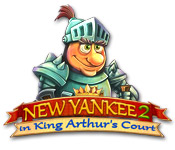 Return to the days of magic, maidens, goblins and gold to help an unwitting knight and his feisty wife find the Fountain of Living Water! You'll need to cross rugged terrain, battle undead skeletons and overcome huge obstacles to make it, but with the knight's fair lady cracking wise every step of the way, you'll barely notice the other hardships...

To complete 40 levels of finely tuned time management action, you'll need to carefully balance your resources as you harvest food, mine gold, repair bridges, build buildings and ward off witches. The missions in New Yankee 2 also feature all-new challenges such as sneaking past roving guards and avoiding gun fire as your workers complete the tasks you give them. Only those players who figure out the quickest way through each level will win the gold! Are you ready to prove yourself? Then play this side-splitting epic today!

The Connecticut in King Arthur's Court movie with Bing Crosby is one of my all time favorites...