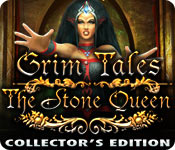 The family saga continues when your nephew Brandon encounters the mysterious Stone Queen in a lonely mountain town. She used to protect the miners here, but now she’s out for revenge! You must discover the truth behind the queen's anger and save both worlds before a greedy heart brings about their destruction. You'll meet new friends, but you'll also face new foes in Grim Tales: The Stone Queen, an intriguing Hidden-Object Puzzle Adventure game.

Check Out The New Visuals!

At first I was concerned when there was no mention of the Gray family. A “Grim Tale” would not be a “Grim Tale” without that demon-prone family of ours. Never fear, our darling nephew has got himself in a fix, and it’s SUPERAUNTIE to the rescue. It’s just we didn’t receive a formal invitation this time, *grin*.

However, the game does not follow the same pattern as the previous “Grim Tales”. No wandering through Brandon’s memories, this time we must save him in the here and now. Once we find him.

It is pure chance (of course it is) that we run out of petrol near a mining town where legends say the Stone Queen protects and blesses with gems all hard-working & honest miners.

So why are the mines closed and the people turned to stone? And what on earth brought Brandon here?

From the moment the game begins you know that you can expect something really special. The GRAPHICS QUALITY is sensational! I couldn’t believe so much improvement could be made on such high quality graphics as we found in the previous games. And many delightful scenes have been created to showcase it. There are all kinds of locations showing the extent of the imagination of the artists.

I have to make particular mention of one track of MUSIC which was linked to entry into beautiful areas. It was heavenly. I could sleep soundly every night to the sound. Mind you, some of the ENVIRONMENTAL SOUNDS are also wonderfully soothing. Yet there was still room for creepy and dramatic effects as well.

In GAMEPLAY, puzzles are favoured over HO scenes, and MANY ORIGINAL PUZZLES were QUITE HARD. Some of the instructions were sufficiently vague for me to be unable to finish them. Interactive LISTS for the HOs, no repeats. These were clear and decent sized and often truly beautiful.

There is a fair amount of to and fro, some of the actions and uses of items are less than obvious, and it is a large game area. This makes the INTERACTIVE JUMP MAP essential. The HINT button GIVES HINTS, not exact instructions, although it was pretty obvious in most cases. You also get help from some intriguing and amusing sources, but that’s for you to find out.

With so much to do and so much ground to cover, the game is QUITE LONG, as all the Grim Tales games are.

This one is a bit different from the rest in the series, and some may miss the more structured gameplay of the earlier games, but this one is well worth the extra effort.

I Recommend This Game!
luvtoread

The Gray family was the one's we referred to (in the BF  forum's)  as the family only
djrum could love.

Some of us other players lost patience with this family.
I really did like this game,  altho I was a bit confused as I am Brandon's Aunt, the Great
Detective who only gets invitations when yet again they've gotten into trouble,

but knew nothing about the Uncle,  who I believe was the Mayor in the game.
Of course Brandon is there,  cause wherever someone in that family goes,  trouble follows.

I agree with your assessment of the game.  Very enjoyable.   I thought it was an improvement
over the others as I remember the first one seemed long because we were required to do things
the long and hard way .
Sponsored content