Fallen: The Flowers of Evil

Fallen: The Flowers of Evil

Fallen: The Flowers of Evil
by Taba Games - January, 2013 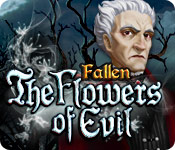 You've seen a lot as a doctor, but after making a simple house call, you stumble into a supernatural investigation. A little girl is suffering a high fever after being attacked by a monster, and she's not the only one. The city is quarantined as mysterious flowers begin to sprout all over Blackburn. Who's behind this? How are all the clues connected? There's only one way to find out, in Fallen: The Flowers of Evil, a mysterious Hidden Object Puzzle Adventure game.

Re: Fallen: The Flowers of Evil

FIRST IMPRESSIONS
I surprised myself by really enjoying this game. I bought it on a whim, and didn’t expect much, but it is really quite fun. As long as you like HOPs.

SIGHTS & SOUNDS
The graphics are a bit rough at times, but I don’t think they were bad. Instead, it’s more that the game’s looks suffered from a lack of animation. Had there been more of it, I think the impression the game made would have been much better. As it was, it was a bit flat. The music was very much in the background, but sometimes the ambient sound would become distracting. The voiceovers were excellent.

WHAT’S HAPPENING?
As a doctor you come to the home of a man whose daughter is suffering some unknown ailment, but which seems pretty obvious (to us as players), when we notice the bite marks. The rest of the story is about following clues about the origin of this illness, which means, of course, who exactly has attacked her. In the process, the young patient disappears, so then you must also look to find her. What makes this a bit of a weird kind of vamp story is the beautiful though deadly flowers that seem to be taking over.

GAMEPLAY
There are a lot of HOPs, all of them simple word lists, all of them visited three times. I know, it’s a lot, particularly seeing there are not, by comparison all that many puzzles. But the scenes are well drawn, the items easy enough to find, and you do not come back to the same scene too soon – in most cases. The puzzles are mostly familiar, but some were new and fun.

As an alternative to HOPs, you could play an old-style brick and paddle game, with the games getting harder as you progressed through the game.

There is a large amount of adventure gameplay, with loads of locks to be opened, inventory items to find and use, and exploring. The hint is directional, and you also have a note book. The map is a jump map, but doesn’t indicate active areas. And it is inside the notebook, which is a pain. Further, each time, it is laboriously unfolded before you can look at it, and refolded before you can leave. It was often easier just to traipse around without it.

Which brings me to one objection I have with this game. Every action is done slowly, whether it is unscrewing a light bulb, or opening a crate with a crowbar, or simply turning a key in a lock. It slowed the game down, and artificially lengthened it, without actual content.

COMBINED IMPACT
I enjoyed this game. As a standalone SE, I believe it rates far better than most. It is a game for HOP lovers, but there’s still plenty of us out there, and many will love this game.