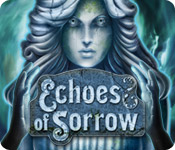 Listen to the Echoes of Sorrow
and remember  who you are as you explore your memories in this fun
Hidden Object game!  While being chased by a dark shadow, you trip and
hit your head.  Because of this amnesia, you must go through your past
and relive your  memories. Travel through time and stop the dark shadow
that is still  after you!

Options include separate sliders for sound effects and music, full-screen and custom cursor.

You can click through the intro screen, watch it unfold naturally, or SKIP it entirely. It's short, but to the point.

The Tutorial is optional, and I chose to skip it. It didn't take long for me to get stuck. It was apparent what I was supposed to do, but like any adventure game, you can't just zip along at your own pace. Completing certain tasks in the game will make things appear that were not there, previously. It took me a couple of hints to realize that this was happening, but I did not have to resort to a walkthrough.

There is no misclick penalty. Your to-find lists are written, and it took me a bit to realize that there is a subtle hint system in place, making the names of the items on that list that you're nearest to kind of "burn", ever so slightly. So, if you wish to blaze through the HOG portions, you can do so, and if not, the burning is easily ignored.

HINTS are refillable, and are available during both the HOG scenes and the adventure portion of the game.

The puzzle portions are short and easy, but also SKIPPABLE and pertinent to the story.

For those that have a problem with spiders, I saw two during my trial, and they were quite large, but not something we had to interact with directly.

The graphics are bright and colorful, whilst maintaining a creepy atmosphere. The music and sound effects are perfect, in my opinion. Both are environmental and tone-setting without being intrusive.

It looks to be a short-ish game, but this adventure-HOG is very well-done, in my opinion. I will certainly be purchasing it, soon.

Have finished the game, and while it was longer than I originally expected, it is still on the short side. VERY disappointed by the hand-holding, but this would be a good game for adventure-beginners.

I still feel that it's a nicely-done game, just would have REALLY loved to have a difficulty setting on it!
JustTheFacts

It’s just there’s so many better games now. Once, I would have rated this quite highly. I would still RECOMMEND it for BEGINNERS. It is a SIMPLE game, with a lot of HELP thrown in, so it is ideal for people just dipping their toes in the water of HOP ADVENTURE games.

You take a nasty fall while running from a shadowy figure, and suffer AMNESIA. In order to find yourself again, you must relive PIVOTAL MEMORIES. This will unchain you and allow you to escape the evil chasing you.

The game is HO almost exclusively, with just a few SIMPLE PUZZLES for variety.

The HOS are NONINTERACTIVE LISTS, and the scenes are fairly static. The GRAPHICS are old now but QUITE GOOD. They don’t stretch well on a widescreen monitor, but they don’t interfere with your ability to find the objects. Hovering your cursor within the scene will GENERATE a PURPLE FOG on the names in the list of those items that are CLOSE. And HINT is very quick.

Outside HOS, HINT will point to any uncompleted task in the LOCATION, regardless of whether it is active.  There are also PURPLE OUTLINES that highlight INTERACTIVE AREAS.

There NONE of the things we now take for granted. No map, no journal, no interactivity, little animation. It is also very short – 2 hours tops for me.
But it is an alright game, with no obvious flaws, and I’ve certainly seen a lot worse.

If you’re starting out, and want to start slowly with something  straightforward, I’d recommend this game. Otherwise, no.

(And yet, and yet... I have an inexplicable fondness for this game, and every now and then play a little of it.)
Sponsored content