Spirits of Mystery: The Dark Minotaur
by ERS Games - December, 2012 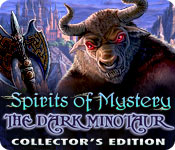 In the dark of night, an elusive figure breaks in to the royal menagerie and steals four magic animals, your childhood companions and dearest  friends. It is up to you to save them! Take the journey to discover more about the Dark Minotaur who threatens the magical world. Can you save  them in time?

Re: Spirits of Mystery 3: The Dark Minotaur

Spirits of Mystery: The Dark Minotaur (IHOG)
based on 35 minutes of demo time

This is a very pretty game by ERS Game Studios. The music and graphics are very crisp and bright, and the story did not grab me at all.

There are three modes of play to choose from: Casual, Advanced, and "Brave Princess." Options include separate sliders for music, effects, and voice, plus full-screen or wide screen, custom cursor, and the ability to change difficulty level at any time

It took nearly 35 minutes to run into my first hidden object scene (good for those of us who prefer the adventure play!) and the scene was lightly interactive -- ie. pick up an item to smash a bottle in order to find the ship that was inside. There is no misclick penalty on the casual or advanced mode of play - not sure about the hardest level.

There's not much I can say about the game really. It has beautiful graphics, very nice cut scenes, and absolutely did not draw me in at all. I need a compelling story to hold my interest, and I simply did not find that during the short time I played. I felt much the same about the first game in the series, and I haven't tried the second, but I have a feeling that this series simply isn't my cup of tea. To each his own! Try it, you may enjoy it!