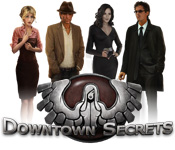 Discover the Downtown Secrets! After
mysteriously disappearing for three years, Marie is back in Alex’s life
and needs his help! Using her one phone call, Marie begs Alex to
search the scene of a murder and find some documents for her. After
asking Alex to deliver the documents to Andre at The Joint, Marie hangs
up and leaves Alex in the middle of a mystery! Scour Hidden Object
scenes and discover exactly what’s going on with Marie in Downtown Secrets!

Exiting a scene will cause you to lose your level progress, so choose your exit point(s) wisely!

The story is interesting, beginning with a SKIPPABLE cut-scene that you can also click through at your own pace.

HINTS are refillable, and there is no mis-click penalty. The hint
themselves are given as pictures - in other words, an approximate area
to look. They work quite well, actually.

MINI-GAMES are pertinent to the story and are also SKIPPABLE. "Mini"
is a good description. There is some very light interaction during the
hidden object scenes, and the mini-games are not difficult... at least
not yet

There are ZOOM-in areas of hidden object scenes, which adds to the
difficulty, as you never know which part you need to look in to find
the items. The hidden objects list does not have its own toolbar at
the top or bottom of the screen. Instead you have a PDA-kind of device
that shows up to six items-to-find at a time. The PDA also serves as
your task list.

There are some beautiful graphics in this game. The hidden objects are
appropriately placed, yet not easy to find, and that artwork is pretty
nice. The second cut-scene of the game, though... It shows a man
going up in a glass elevator at night, and it is just beautifully done!
The reflections, the moon shining on the clouds, the differing
perspective as you rise through the city... Just lovely.

The HOG scenes are a bit darker than I'd like. This game would've
really benefited from a brightness control option, but it's not so dark
you can't find anything.

I have finished 3 levels in 45 minutes, but I can't give you an idea of
the length of this game, as I don't know how many levels there are.
There's not a lot of in-your-face story in this game, and yet I find
the it intriguing and would like to see what happens next. This is a
straight-HOG, so be sure to demo the game before purchasing!