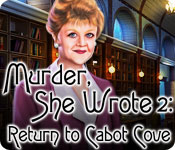 Take on the role of beloved murder-mystery writer Jessica Fletcher and return to lovely (but lethal) Cabot Cove! In Case 1, a prominent gallery owner is found stabbed in the back, and Jessica must distinguish friend from foe. Intrigue abounds in Case 2 when the philanthropic president of the local charity is electrocuted to death. It's up to Jessica to discover whether the motive was love, money or power. Jessica decides that she needs a vacation after all the mayhem and murder in her hometown, but Case 3 finds her embroiled in a mystery involving James Joyce!

Re: Murder, She Wrote 2: Return to Cabot Cove

FIRST IMPRESSIONS
Three years after the original Murder, She Wrote, this sequel was released. A lot had changed in that time, including the drop in popularity suffered by strictly HO games. Still, I wish this one had stuck to the formula. As a HOPA, it doesn’t have anything like the same appeal.

SIGHTS & SOUNDS
At first I thought it was the graphics that were not up to the standard of the original game, but they are alright. Not great, but okay. It is the artwork that has reduced in quality. There is less detail and a distorted version of Jessica, from the one we knew in the first game. Clearly, a different artist is at work, and I don’t see the same amount of talent. The game opens in widescreen, which further stretches things out of shape, but toggling aspect ratio improved the graphics.

Again the voiceovers are extremely professional, and although the music from the show is still there in the opening, during gameplay, the music is subtle and soothing.

WHAT’S HAPPENING?
The game gives you 3 individual cases to solve this time. In two we are in Cabot Cove, Maine, but the last case occurs while we are away in Ireland. As always, Jessica Fletcher has the uncanny knack of finding a dead body just by walking down the street in her quiet home town.

GAMEPLAY
This is no longer a strictly Hidden Object Game. There is an easy adventure component with a lot of hand holding that nevertheless managed to frustrate me at times. The inventory items you find are used soon after you get them, and you almost always will know where you need them. But the movement does not seem very logical and there is a lot of backward and forward. There are many characters to talk to, including the police chief, and again much of the time is taken up with dialogue.

As with the first game, the HOPs are interactive word lists, where the words do not have any vowels. To get them you must find the typewriter keys in the HOP scene. Typewriter ribbons give you extra hints. The objects are easy to see and generally not hard to find but some are quite small. Because there are less HOPs, there is less opportunity to collect hints from the scenes. So it is important to carefully ration them.

The puzzles in this game more closely resemble the standards we’ve come to expect. But you are still expected to deduce from the evidence. There is a notebook that holds clues in it. No map. There are two options for difficulty.

COMBINED IMPACT
This is an okay sort of game. If you loved the series, or whodunits of the Agatha Christie style, you’ll love this. Many fans of the first game, though, will not like this at all. It is just too far away from the original gameplay. Personally, I found it mostly irritating.