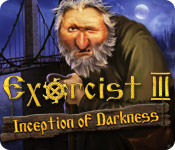 In the middle of a forested archaeological encampment surrounded by long deserted dwellings and artifacts, we again find Garret Ghostfighter. He has been summoned here to investigate the strange disappearances of scientists, as well as his own godson, Jacob. The missing vanish without a trace and screams are heard at night. Which new evil are we to fight this time? Find out in Inception of Darkness: Exorcist 3.

Re: Inception of Darkness: Exorcist 3

This game should have been icing on the Exorcist series cake. It has EXCELLENT GRAPHICS, a COMPELLING STORY, and INTERESTING GAMEPLAY.

But it was totally ruined for me within the opening moments.

This STORY is set in Jacob’s (our character from Exorcist  II) childhood. He has been kidnapped by a demon, and his father calls in the boy’s godfather, none other than our old friend Garret Ghostfinder. Once again we get to play him at his prime.

But it is absolutely sacrilegious! They have substituted Ghostfinder’s very proper English VOICEOVER to one with a broad American accent. Unthinkable. It would have been much better to simply call on an American exorcist, and leave Ghostfinder out of it altogether. The STORY didn’t really require that it be him to make sense. It was just a fun aspect.

Other than this, the game has become pretty much your every day mainstream SE game. They have messed not only with the VOICEOVERS, but the AMBIENT SOUNDS AND DEMONIC MUTTERINGS have been replaced by BLAND MUSAK. Ick!

The GRAPHICS are GREAT, the HO SCENES are clear, not too cluttered, and – an important improvement from the previous games – there are no more objects too tiny to identify. The scenes are visited twice, not always spread sufficiently apart.

WELL DONE on the PUZZLES though. These had some of the usuals, but they also had some INTERESTING & ORIGINAL ones as well.

On the Quirk-O-Meter, this game scores very low compared to the other Exorcist games, but it retains a bit of that maverick spirit – some of the items used, well, interestingly. There is really only one character outside the father and Ghostfighter and he DEFINITELY rates as QUIRKY.

This Exorcist takes itself a bit too seriously for my tastes. The previous ones always give me a good giggle.