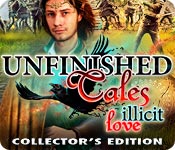 Thumbelina had the perfect happy ending, until the Raven Queen crashed her wedding, kidnapping her prince. To make matters worse, the Raven Queen locked her up in a dungeon! Will she be able to escape and rescue her prince before he becomes the Raven King? When you’re only a few inches tall, you need all the allies you can get, but beware! Anyone you meet could be a spy working for the Queen! Join Thumbelina as she journeys across the fantastic Kingdom of the Floral Elves in Unfinished Tales: Illicit Love, a charming hidden-object puzzle adventure game!

This is from Elephant Games, a company that makes some great games. Once again, this is a beautiful game with HOS and minis. Outstanding graphics and good game play are standard for this company. This is a Fairy tale in which even the dungeon is pretty. It is a CE on sale for one day at half price at BFG.

Iconic Good and Evil characters spar for the handsome Prince. Assorted animals and other characters appear. The game begins with a scene that changes through the 4 seasons with items to find in each season. There are HOS with some limited interaction. The Demo was almost too pretty, it took my breath. I will purchase at the Sale price which is only $2 more than the regular BFG Game Club price. It includes a Map and the usual Strategy Guide but I did not need to use either in the Demo.

This game, like another recent one, included BFG in the Credits. I don't know if Big Fish Game Studios is purchasing some big game companies or collaborating or if it has become policy for the Game Portal to get Top Billing in the credits. I went to the Elephant Games WEB site to see if I could find an answer but BFG was not named as the owner. I also found no mention in the BFG Blog about the acquiring of this and other well-known game developers so the top Credit is a mystery to me. BFG, Elephant Games and ERS are all excellent in game development and their games are tops in the field!
JustTheFacts

FIRST IMPRESSIONS
Lively and light hearted intro to this game. The graphics are excellent, colourful and beautiful to look at. The voiceover is, well, overwrought I’d guess. She is Thumbelina, (yes, the little girl only a few inches from the fairy tale) and her monologues are a very amusing use of the language and exaggeratedly expressive. The music is simple and pleasant. Optimum word here from the start seems to be ‘fun’.

As well as four sliders for sound, there is also one for gamma levels, and a toggle for special effects. As far as I could tell, they consist of increasing the brightness on the various sources of light throughout the game.

One really special location comes up early in the game, and it is just wonderful. The Hall of Seasons is actually changeable to the different seasons, and the different visuals for each look sensational.

WHAT’S HAPPENING
It is our wedding day, and this should be the beginning of our ‘happily ever after’ tale, but we are attacked by a witch who claims she is betrothed to our groom. He is kidnapped, we are thrown in the dungeon, and things look bleak. The witch intends to marry your prince, take over the kingdom and rule with an iron fist.

MAKING PROGRESS
Progress is HO interactive lists, and puzzles. I found both harder than usual, and I don’t know whether I’m just having bad day, or the puzzles are especially tricky. I had to skip several, and I couldn’t understand the instructions for one of them. Likewise I found myself using the hint button more often than usual, in the main part of the game. Hint actually tells you what to do next, and there is an interactive jump map to guide you too.

FAMOUS LAST WORDS
Having finished the game twice I still don’t know whether the witch’s accusations are true, and that seriously detracts from my satisfaction with this game. Further, the ending is very abrupt, and the game itself is not long. So at the end of the game, there is an unfinished feeling – perhaps that’s the reason for the name “Unfinished Tales”!