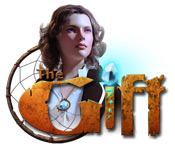 Dead bodies are piling up, a bizarre symbol on their foreheads. Guide paranormal investigator Sarah Meiville through this unforgettable cross between a moody '40s detective movie and a modern occult thriller!

With a single touch, Sarah Meiville can see the final moments of a dead person's life. Though this gift once made her valuable to the police, the cops have shunned her since a tragic turn of events cost innocent people their lives.

Then dead bodies started piling up, a bizarre symbol on their foreheads. Soon, whispers of the Nothingman could be heard on the rain-slicked streets of the city, prompting a tabloid writer to lure Sarah out of retirement to stop a madman.

Guide Sarah through a classic noir adventure as she searches for clues, solves puzzles and learns to use new visions that appear to be helping her. The Gift will transport you through a town steeped in neon glow, challenge you with cunning mini-games and surprise you with cleverly hidden objects. From the music, to the visuals, to the voice work, The Gift is an unforgettable cross between a moody '40s detective movie and a modern occult thriller.

Can you bring the killer to justice and restore Sarah's name? Lives are depending on it!

It is 1941, and discredited psychic detective Sarah Meiville desperately wants to earn back her credibility and her job with the police force. Had this been a modern-day tale, I would not have been able to enjoy it as much as I have... Massively disturbing a crime scene would be too prevalent in my mind! However, since forensic science had not come all that far back in the 1940's, I was able to put these feelings aside and just concentrate on the gameplay and story.

There are separate sliders for background music and sound effects, as well as options for full screen, custom cursor, maintaining aspect ratio, and the ability to turn sparklies on/off at any time!

Yes, Virginia, there is a Santa Claus... err... I mean, there are two options for difficulty, though I think they meant that interactive areas do NOT sparkle on the Expert Mode!

The opening scene is skippable, if you so wish. All dialogue is voiced over, and the actors chosen do a very good job. Our heroine has a Southern twang, rather like Kyra Sedgwick in The Closer. You need to click in order to continue dialogue throughout the game, though it can be skipped (though you don't have the option to click through during the opening scene.)

I like the character designs, and their movements are realistic, whilst still being appropriate in the game (ie. not so realistic that they look jarringly different than the background images.)

The gameplay is fairly straightforward, without toooo much to-ing and fro-ing... except when we have to keep going up and down the elevator. That was a bit much

I'm really enjoying the story in this one, wanting to know what happens next, as well as what happened to cause Sarah's current state of affairs.

The graphics are very nice, and while the devs have used "recycled" items during the hidden object scenes, it's not really a big deal! These items don't look exactly the same, as they are oriented (positioned) differently, and frequently have different shading due to the shadows in the scenes.

The HOS themselves have some very light interaction, such as grabbing a knife and using it on a loaf in order to get "sliced bread".

Try playing with the sound turned up, then click on the HINT button before it's fully charged... Ooooo~ Speaking of the HINT button, it is refillable, and the length of time it takes depends on which mode of play you choose. If used during the adventure portion, it will either highlight what you need to see/do, or give you an arrow showing you which way to go. There is a misclick penalty if you randomly click too many times.

If you can sit back and enjoy the story, the graphics, and the music/voices, and overlook the very small complaint of recycled items in the HOS, this is a very good, long, and enjoyable game. Recommended!