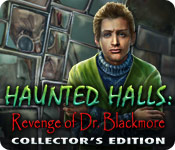 Prepare for a mind-bending journey into the realm of the weird in Haunted Halls: Revenge of Dr. Blackmore! When you wake up in the lair of the notorious Dr. Blackmore, you know it’s going to be a bad day. But to make matters worse, he’s also holding your fiancé and a handful of other people hostage in various locations throughout the building. To save them all, you’ll have to use your wits and your will to survive a series of nightmarish experiments Blackmore has concocted especially for you. Brace yourself for the unexpected in this exciting Hidden Object adventure!

FIRST IMPRESSIONS
Newspaper headlines flash past giving details of apparently totally unconnected disappearances, including your own. THEN, it gets creepy. You wake strapped into some futuristic restraint chair, a disembodied voice tells you there is no chance of escape, and our old buddy Dr Blackmore turns up, literally crawling the walls! This can’t be good.

SIGHTS & SOUNDS
As always the ERS graphics are water-colour, hand-drawn, very detailed and clear. The cut-scenes look good, but personally, I thought there were a bit too many of them. Still, I can see the temptation, when you see what Blackmore looks like now.

Sounds are all good. Music has a definite sci-fi feel to it, and the voiceover for the computer is perfect. The doctor has his own special way of speaking in all 3 of these games, and I should have mentioned before that I don’t like it. But it is at least unique, and quirky enough to sound insane.

WHAT’S HAPPENING
We start off a little differently than the other Haunted Halls games, because not only is Tim captured, but so are we. The space ship-like location is inescapable, and Blackmore monitors everything, so we have no choice but to play the role he has planned for us.

The four disappearances from the introduction have one thing in common, they are all people who have crossed Blackmore. Now he has sent them each to a specific time and place, each the scene of a major catastrophe, to suffer a Blackmore-decreed appropriate end. And we’ve got to release them in order to get to Tim.

MAKING PROGRESS
The Haunted Halls series continues to be mostly about HOs, but there is a lot of changes in this game since the last. There are, for example, four styles of HOs, including the 3 different types of silhouettes, and the interactive list.

The puzzles are okay for the most part, many of original ones. I liked the portable laboratory, where we mix up potions, following detailed instructions. This one is more fun than these things in other games, because it is just difficult enough to have to pay attention. There is also a specific puzzle that comes at the end of each chapter, getting more difficult each time, that is setting dials on gauges, where one affects the others.

The electronic notebook is a big help in keeping track of things, because there is no map and the hint button only tells there’s nothing to do.

FAMOUS LAST WORDS
I forgot to mention there are a lot of interesting critters doing curious things throughout the game, but no cute companions. And, I found the game took quite a long time to complete.