Available from:
Frogwares
Big Fish for PC
Steam in "The Sherlock Holmes Collection " 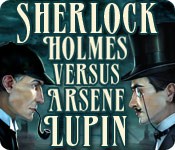 Big Fish description:
Embark on an investigation as Sherlock Holmes! Stop the legendary thief, Arsene Lupin, before he steals famous historical objects from England! The French thief, with an impressive track record, has crossed the Channel to provoke you on your own territory! Dive into this extraordinary game of cat and mouse in Sherlock Holmes Versus Arsene Lupin, a wonderful Hidden Object Puzzle Adventure game!

Frogwares description:
Play the role of Sherlock Holmes and embark on an investigation full of suspense in this thrilling adventure in the heart of 19th century London.
Arsene Lupin, a young French thief with an impressive track record, has crossed the Channel with a daring proposition for you on your own territory. Lupin challenges you to prevent the theft of five priceless artefacts over five days, stored in prestigious locations such as the National Gallery, the British Museum and even Buckingham Palace!

This is the start of an extraordinary game of cat and mouse, packed with exciting puzzles in London where the renowned landmarks are magnificently reproduced. Prepare to rise to Lupin's challenge and confront the master thief!