Sherlock Holmes The Secret of the Silver Earring

Sherlock Holmes The Secret of the Silver Earring

Sherlock Holmes The Secret of the Silver Earring
by Frogwares, 2004 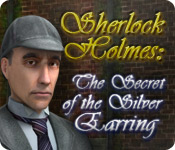 Sherlock Holmes comes to life in a brand new adventure: an investigation created in pure Holmesian style where your talent for deduction will be put to the test.

In October 1897, Sherlock Holmes and his trusted friend, Dr. Watson, are invited to a party hosted by Sir Melvyn Bromsby, a construction tycoon, in honor of the return of his daughter, Lavinia, from London. During his opening remarks, a gunshot kills Bromsby on the spot and creates pandemonium.

Sherlock Holmes decides to act immediately, and the game is afoot! There are a number of suspects amongst the invitees and friends of the deceased. It's the beginning of a long series of murders that must be solved as soon as possible.

Game Features:
Sherlock Holmes and Dr. Watson come to life as you lead the investigation and meet some of Conan Doyle's other famous characters. You will have the chance to visit 40 different locations straight out of Victorian England, graphically reproduced and complete with original soundtrack. You'll interrogate a number of witnesses through in-depth conversations and complete your investigation by analyzing your discoveries and deducing the facts with the clues you uncover.