Master of Defense
by Voodoo Dimention 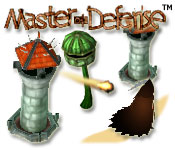 In this real-time strategy game, you are tasked with building towers to defend your citizens. As you progress, you'll be able to upgrade or build new towers with the gold you've earned and add on special abilities through skill points you've accumulated. Choose your defense carefully to keep your citizens protected! If even one monster gets past your guard, it could spell certain doom for your entire city.

Re: Master of Defense (Tower Defense)

Master of Defense was developed by Voodoo Dimention. No, that is not a typo, and I think it might actually be the only game by the developer. It was released in 2005 and was (according to Wikipedia, which is a questionable source) the first standalone computer game of the Tower Defense genre.

A Tower Defense game is sort of a race. There’s a starting point (usually on a structured path) where the bad guys appear (usually in waves, which gives the
player time to prepare for the next wave either with a small window of time, or by allowing the player to indicate when the next wave should appear), and an ending point. The purpose is to prevent the bad guys from reaching that end point, and to achieve that end, the player is provided with tools that are essentially (usually literally, but not always) towers. There are towers that achieve specific goals (perhaps they slow the enemy down, or maybe they attack a specific type of bad guy that the other towers can’t attack- just as examples), and there’s usually one type that will universally attack any enemy within range.

Now, as I mentioned previously, this is a fairly old game, and one that was clearly not originally written in English, but it still has great game play, and the graphics are decent. The first area is the tutorial area, but it is NOT easy. There is a steep learning curve in this game, and I still have not finished the hard mode. The features of the game are not all that forgiving, either. Because of the type of strategy involved, the game will only save if the player manually saves, and only one game may be saved at a time, or else the previous game is erased. The key strategy for me was to upgrade towers a lot before building new ones. It’s helpful to write down the wave number that usually gives me more trouble than most, as well.

The bad guys in this game have two primary characteristics: Ground and Flying. In addition, each unit type has a speed and health pool that can vary. Starting in the second area, the game allows the player access to the skills, which are gained in exchange for the experience received for completing each wave. It is 20 experience per wave, and 320 have been accumulated in the tutorial area. The game does not allow access to the points in the first area at all, but at least it gives them all back instead of starting to count after the tutorial. Even though there are only five areas, each area significantly increases the amount of waves to contend with.

As the skills are built up, the player eventually gains more tools with which to fight the enemies. If the bad guys make it to the end of the path in Master of Defense, they can kill part of the population, depending on how much health they have left and how big they were to begin with. The largest monsters can kill 10 people. If the health of the monster is low enough, the people can kill the monster, but the player is not granted any gold for this. The population begins at 100, however it is possible to recruit more people. This happens at the start of a new area and is based on how much money the player had at the
end of the previous area.

Too Long; Did Not Read: All in all, I really enjoy this game. That should not surprise anyone who knows me, since I am a fiend for this genre. I acknowledge that the flaws in this game’s design are many, but it has provided me with a lot of entertainment, so I am glad I bought it and would encourage anyone who is interested to give it a chance- you might be surprised!

Has anyone else played Master of Defense? Did my review effect your desire to try the game at all?
_________________
Never be a prisoner of your past.
It was just a lesson, not a life sentence.