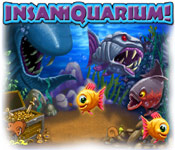 This action puzzle adventure will have you buy fish, upgrade your weapons, and unlock secret pets as you explore this captivating underwater world. Spectacular 3D graphics, rousing sound effects, an original score, and ruthless alien beasts make this a can't-miss game!

Insaniquarium was developed by Popcap Games , the company responsible for bringing us a trove of great games. Some of the titles you might recognize from them include: Bejeweled, Peggle, Zuma, and Plants vs. Zombies. I am a long-time fan of Popcap, as their games were the ones that hooked me straight away. In fact, Insaniquarium was the first game I ever bought from a casual gaming portal.

Insaniquarium is another game that is hard to put a genre on. I hesitate to use the term “arcade game” because it has a level of complexity that is not often present in the old arcade games, but neither is it precisely click management, even though there is a great deal of clicking involved. I suppose it is a fairly solid mixture of both, as well as being a pet simulation, in some ways. This is probably as clear as mud, but the best way I can think of to fix that is to
explain what the game is about.

Well, the game is about a series of aquariums. Each level will start with either a couple of guppies already in the tank or a breeder fish that looks rather like a chicken and a sea horse. The player must feed the fish by clicking in the water, but each pellet of food costs money, so I usually wait until the fish turn a bit yellow and then drop the food right near them. If the food is dropped too far away and the fish can’t reach it quickly enough, it will fall offscreen and that money will be wasted. This is not a problem in the later part of the level,
but it is fairly critical in the beginning. So the first tank is pretty calm and gives the player an idea of how to care for the fish. It show the fish growing from small to medium to full sized. Baby fish do not drop anything, but medium and large fish drop coins, and that is how to progress through the levels. The goal is in the upper right corner of the tank screen, and it will usually involve buying three very expensive things.

As the game progresses, it introduces new fish and selectable pets to bring into the levels to help with the goal. If you have played Plants vs. Zombies, you are probably familiar with one of the early pets- Stinky the Snail. He creeps across the bottom of the screen and tries to catch as many coins as possible. In the first level, Stinky probably won’t seem that useful, but later in the game, he’s almost required. The new fish being introduced are part of a food chain. The next fish to appear will eat guppies, and then the next fish to appear will eat THAT fish, and so on. Their food may be more expensive, but the amount of money they drop more than makes up for it.

Money is used not only to meet the goal and feed the fish, it is also used to buy more fish, upgrade the food quality (they stay full longer), upgrade how many food pellets can be in the tank at any given moment, and upgrade the weapon (more about the weapon later). Each tank is self-contained, so none of the upgrades carry over from previous levels, but that’s all part of the fun.

This all sounds like a pretty basic fish simulation game, and fairly dull up to this point, right? Well, that was all before I mentioned the aliens. You may be wondering what aliens have to do with an aquarium, and I think that is an excellent question, in theory, but I have learned not to question Popcap too much when it comes to random oddities in their games. I mean, why is there a marble spitting frog in Zuma? So, every now and then, one of five or six alien types (starting with one alien at a time in the tank and moving up from there) will beam down and appear in the aquarium and start terrorizing the fish. Fish are pretty darn clueless when it comes to aliens, so it is up to the player to
fend off the alien attack by clicking on it until it vanishes and drops a tidy little bit of cash. At least, that’s how the first one works.

One of the aliens regenerates health when you shoot at it while it is in a calm state, so this can be pretty tricky with that one, but it is not as hard as it seems. All of the aliens have different abilities designed to make fighting them more difficult, but they all have ways to be managed. These attacks tend to leave quite a bit of carnage in their wake, and if the alien manages to eat all of the fish (Aha! Maybe the aliens are just hungry?) then the level must be replayed, but there are pets designed to help protect the fish, so do not fret. During the attack, fish will not get hungry or drop coins, however they naturally will swim around the tank and occasionally right into the aliens’
appendages.

You likely will not enjoy this game if:

There are plenty of other features that I have not even touched on, including a personal tank with special fish, most of whom can be named, that also acts as a screensaver.

Too Long; Did Not Read: The game has tons of replay value, because of the strategy element to it, and clicking can get pretty frenzied. There is a lot of humor in Insaniquarium, and I am barely able to summarize that humor. I certainly can’t summarize all the features of the game. You should try it, just to see if it is fun for you!

Has anyone else played Insaniquarium? What did you think of the game? Did this review effect your desire to try the game? Thanks so much for reading and commenting! I think the discussions and getting to know people better is my favourite part of this whole thing!
_________________
Never be a prisoner of your past.
It was just a lesson, not a life sentence.